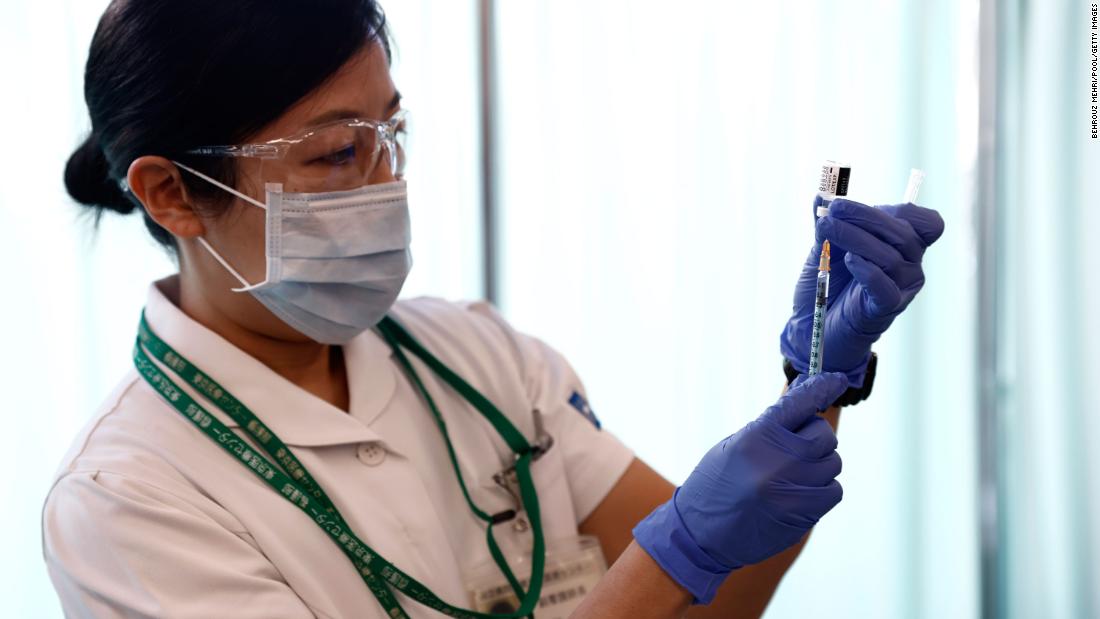 According to the Japanese government, only about 18,000 doses have been administered in Japan.

Like the United States, Japan also uses the Pfizer-BioNTech vaccine as part of its plan. However, it took another two months for Japanese regulators to approve its use.

The government says it has been cautious. After 50 years of a series of vaccine scandals, Japan has one of the lowest vaccination rates in the world-therefore, it is crucial to win a skeptical public.

However, the decision to take slow action has been criticized by some medical experts, including Dr. Kenji Shibuya, a professor at King’s College London, who said Japan’s delay in launching a vaccine and lack of vaccination strategies will ultimately lead to loss of life.

At the end of last year, Pfizer-BioNTech conducted an extensive Phase 3 clinical trial for several months in approximately 150 clinical trial sites in the United States, Germany, Turkey, South Africa, Brazil and Argentina.
The company announced on November 19 that the vaccine has shown 95% efficacy in preventing Covid-19 infection. Two weeks later, the United Kingdom became the first Western country to approve the vaccine for emergency use, and the United States subsequently approved the vaccine on December 11.
On December 31, the World Health Organization (WHO) also approved the Pfizer-BioNTech vaccine for emergency use.

Japan’s approval came six weeks later on February 14, and a smaller domestic test conducted with 160 participants previously showed that the results were consistent with the international trial. According to Japanese standards, the approval is completed quickly-usually the process may take one to two years. But critics say the delay took the government’s precious time.

Shibuya of King’s College said: “The sample size is 160 people, and there is no scientific evidence for the effectiveness or safety (of the vaccine).”

Minister Taro Taro, who is in charge of Japan’s coronavirus vaccine promotion, said that Japan has conducted clinical trials to build public trust in the plan.

According to a study published in the medical journal The Lancet, the study mapped the vaccine confidence of 149 countries between 2015 and 2019. Less than 30% of people in Japan firmly believe that the vaccine is safe , Important and effective, while the proportion in the United States is 50%.
Japan’s resistance to vaccines can be traced back to the 1970s, when two babies died within 24 hours of receiving the combined vaccination against diphtheria, tetanus and whooping cough (pertussis). The vaccine was temporarily suspended, but confidence has been low. Over the past few years, infant vaccination rates have declined, leading to an increase in pertussis cases.

In the late 1980s, people introduced measles, mumps and rubella (MMR) vaccines produced in Japan, which caused panic among people. Early versions of the vaccine were related to aseptic meningitis or swelling of the membranes around the brain and spinal cord. The problem can be traced back to the mumps of the MMR vaccine, which led the court to prosecute and pay huge compensation.

The National Institute of Health Sciences stopped co-injection in 1993 and replaced it with a separate vaccine.

After the suspected MMR scandal, Shibuya said that the Japanese government became “aware of the risks” and its national vaccination plan became a voluntary measure.

Infectious disease expert Dr. Yuho Horikoshi said that these lawsuits have resulted in a “vaccination gap” and Japan has not approved any vaccines for about 15 years.

Recently, in 2013, Japan added a human papillomavirus (HPV) vaccine to its national schedule to protect girls from the sexually transmitted virus, which is known to cause cervical cancer. However, videos of girls who allegedly suffered adverse reactions began to circulate on YouTube, leading the government to remove them from the national timetable.

The Vaccine Adverse Reaction Review Committee investigated these events and found no evidence that there is a causal relationship between the adverse events and the HPV vaccine. However, related reports and the reasons for the Japanese government’s withdrawal of the vaccine from the plan have led to a sharp drop in the number of girls vaccinated, from 70% in 2010 to less than 1% now.
According to a study in The Lancet, such a low incidence may cause nearly 11,000 deaths from preventable cervical cancer in Japan in the next 50 years.
The WHO recommends providing vaccines to girls between 9 and 14 years of age to prevent cervical cancer, and 311,000 women die each year worldwide. According to a study published in the Journal of Infectious Diseases, the incidence of cervical cancer in England is declining due to the vaccine. According to another latest study, also because of this vaccine, Australia is expected to eliminate cervical cancer by 2028.

Professor Shosuch Tsuchida, a social psychologist at Kansai University, said that although Japan has developed resistance to vaccines, there is no widespread “anti-vaxxer” campaign in the country.

Tsuchida said: “Most people who don’t want to be vaccinated are afraid of possible side effects, rather than (they think) believers of’fake’ science.” “The side effects of vaccination in Japan in the past, especially HPV cases, mainly affected these people. thought of.”

Try to make the public skeptical

Japan’s resistance to vaccination has brought the coronavirus vaccine problem to the Japanese government.

Japan will conduct the first Covid-19 vaccination to 3.7 million front-line health workers. The goal is to vaccinate the elderly in April.

The Japanese government has asked half of the first round of doctors and nurses to keep an “observation diary” to monitor any side effects within seven weeks after receiving the two doses of the vaccine.

Although vaccines are currently being promoted, the medical community is still concerned about the resistance of vaccines. This led a group of doctors, including Yuji Yamada of New York, to launch a promotional campaign to encourage the Japanese to take Covid-19 shots-they are doing it with cartoon dogs.

Wearing a white coat, Corowa-kun is a chat bot inspired by Shiba Inu. Its task is to answer questions about vaccines to reassure the skeptical public. The name Corowa-kun is derived from the Japanese “coronavirus” and “vaccine.”

So far, its creators say that more than 55,000 people have signed up for the app, and 70% of them are women. According to Yamada, Japanese media initially reported the potential side effects of the vaccine. He said: “These may have triggered women who tend to consider the risks of vaccines more seriously, so women use the app more.”

The Minister of Vaccination Kungfu Kono has invested his support for the app, but the government has not yet announced its public news.

Shibuya said that in preparations for the Olympics, the government needs to concentrate on promoting to the public that the Covid-19 vaccine is safe, important and essential. He said the government must also take more measures to contain the virus.

Shibuya said: “Suppression, suppression and suppression to eliminate community transmission-otherwise, because the introduction of vaccines is very slow, Japan will repeat the state of emergency again and again.”

“Their basic motive and motivation is to reshape the economy. If they really want to host the Olympics, then they really need to curb the spread, so the potential is almost zero.”