Tracking COVID-19 in Alaska: 6 deaths and 355 reported on Thursday 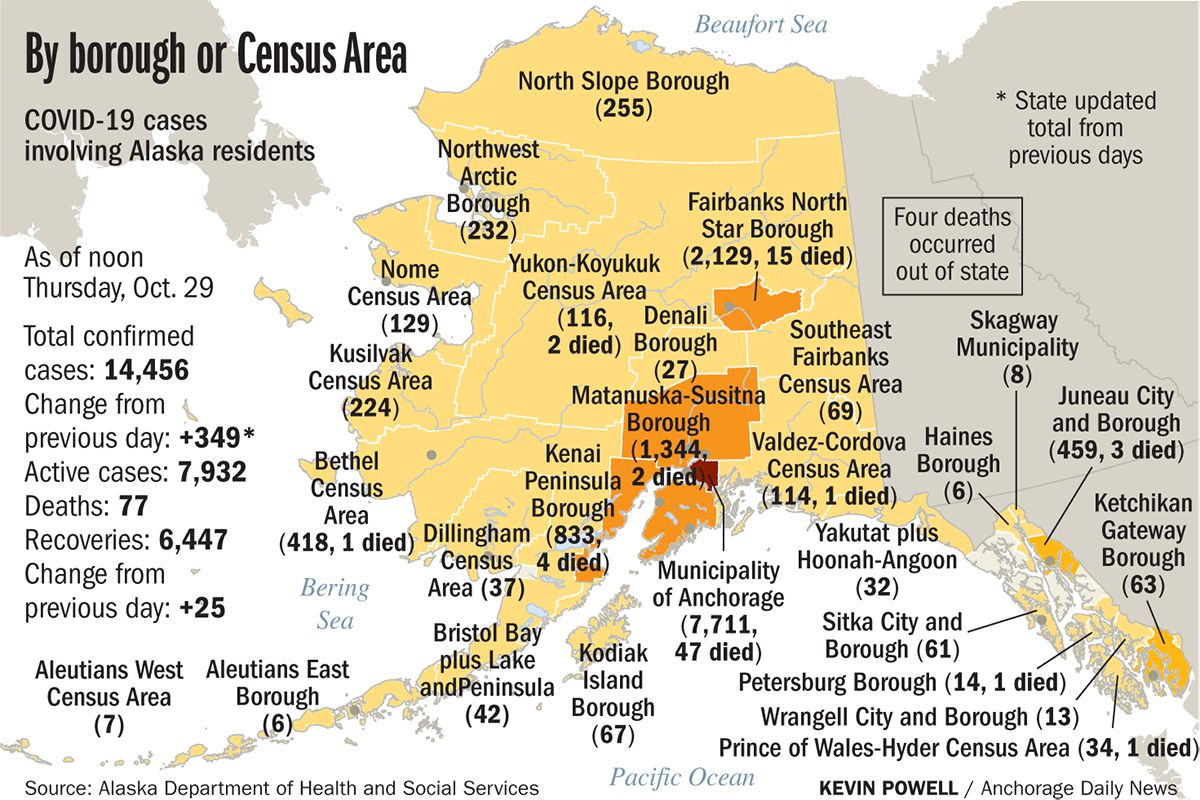 According to the Department of Health and Social Services COVID-19 dashboard, Alaska reported 6 deaths and 355 new COVID-19 cases on Thursday.

According to the state health department, an Anchorage man in his 40s recently died. The five other deaths reported on Thursday were determined during a standard death certificate review process, including two Anchorage people in their 70s, one of whom died out of state. An anchorage woman in her 80s; Ms. Fairbanks in her 80s; and a 70-year-old woman from the Hyde Census area of ​​the Prince of Wales.

Since the beginning of the pandemic, 77 Alaskans with the virus have died.

Although the death rate per capita in Alaska is still the lowest in the country, the state has reported the highest number of deaths in one day at six. The last time so many deaths were recorded in one day was September 25, but DHSS said at the time that some of these deaths had not occurred recently and were determined by the National Center for Health Statistics.

As of Thursday, a record 67 people had been hospitalized due to the virus, compared with the previous record of 63 people on Wednesday. Another 22 people suspected of having COVID-19 have also been hospitalized.

Of the 349 new cases reported among residents on Thursday, Anchorage had 129. Wasilla No. 44; Eagle River 20; 20 people in Palmer; 15 in Soldotna; 14 in Kenai City; 13 in Chevak; 13 in Kodiak; 11 in Fairbanks; Juno has Seven; five in Jugiyak; four in the five-pound North Pole; four in Uchagvik; four in the Delta Junction; three in Ketchikan; three in Bethel; two in Peter Fort; two in Hooper Bay; two in Sitka; one in Homer; Nikiski, one of the Great Lakes; and one in Meadow Lakes.

Among the less than 1,000 unnamed privacy-protected communities, there are 11 in the Bethel Census District; five in the northern part of the Kenai Peninsula borough; four in the Yukon-Koyukuk Census District; and one in Ki Southern Nye Peninsula Municipality; one of the southeast Fairbanks Census Area; one in the Matanuska-Susitana Borough, one of the Western Aleutian Islands Census Area; one in Bristol Bay , Plus the lake and peninsula boroughs.

Six non-resident cases were also reported on Thursday: four in Fairbanks, one in Wasilla, and one in Anchorage.

The state’s test positive rate continued to rise, reaching 8.1% of the seven-day rolling average on Thursday, a record high. Health officials say that a positive rate of more than 5% may indicate a high rate of community transmission and insufficient testing.