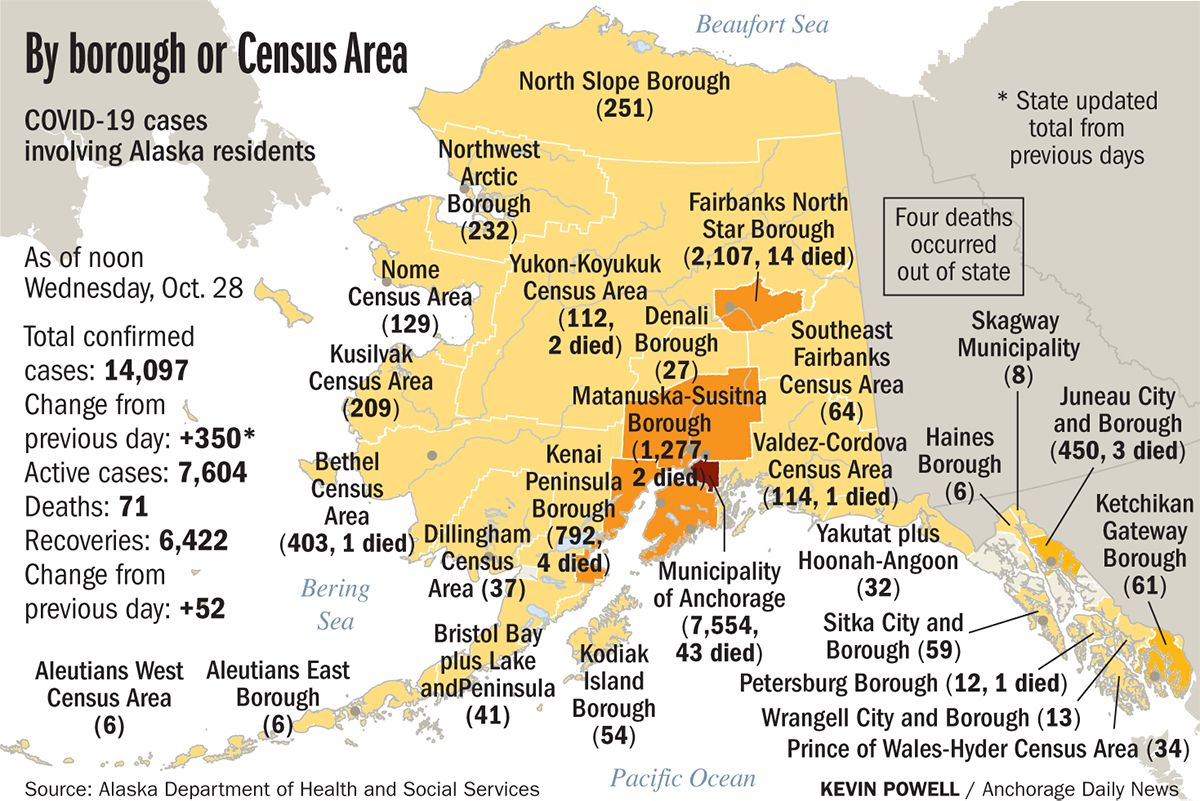 According to the Department of Health and Social Services COVID-19 dashboard, Alaska reported 353 new COVID-19 cases and 1 new death on Wednesday.

According to state data, a Kenai Peninsula resident died.

State officials say the spread of the virus throughout Alaska continues to grow at an alarming rate in both rural and urban areas. Dr. Anne Zink, Alaska’s chief medical officer, said in a conference call on Wednesday that the total number of cases in the state has increased by 56% in the past week.

As of Wednesday afternoon, a record 63 people have been hospitalized for the virus, up from 59 last Friday.

In addition, 17 people with suspected cases of the virus have also been hospitalized.

According to data reported by the state on Wednesday, a total of 71 Alaskans have died of COVID-19.

Alaska’s recent surge in cases (the largest to date) follows a national trend.

Sinker said that the rise in Alaska cases represents a new phase of the pandemic.

The first stage was the “downtime”, when little was known about the virus. At that time, the country was strengthening its response capabilities, and the epidemic curve was on a downward trend.

Sink said: “The second stage is really how we maintain this status quo and maintain a low level in life.” “Unfortunately, we are indeed accelerating into the third stage. Therefore, we are actually asking for personal change Own behavior.”

Zink says that following public health advice has never been more important. This includes keeping at least 6 feet away from others, avoiding parties, and wearing a mask in public places or around people who are not in your immediate family. The national health department this week urged people to be checked and isolated if they experience only one of the symptoms of COVID-19, including cough, fever, fatigue, muscle aches, diarrhea, loss of taste or smell, vomiting, headache and runny nose.

Of the 350 new cases reported among residents on Wednesday, 168 were in Anchorage. Wasilla 55; 23 in Fairbanks; 18 in Palmer; Kenai Island 13; 11 in Soldotna; nine in the Arctic; seven in Eagle River; six in Juno; six in Koze Five Nikkiskys in Buddhism; three in Bethel; three in Tok; two pounds and one in Kidwood; one in Chugiyak and one at the junction of the delta; one in the Great Lakes; one in In the meadow lake; one in Utcagvik; the Douglas family; one in an unidentified area of ​​the state.

Among the less than 1,000 unnamed privacy-protected communities, there are five in the Dillingham Census District; four in the Bethel Census District; two in the northern part of the Kenai Peninsula borough; one in Mata Nuska-Susitana Autonomous Town; one branch in the Gahuna-Angon region of Yakut; one of the western census areas of the Aleutian Islands; one in the Bristol Bay, plus the Lake District and Peninsula District ; There is one in the Kusilvak Census District.

Three non-resident cases were also reported on Wednesday: one in Anchorage, and two in unidentified areas of the state.

As of Wednesday, the state’s positive test rate was 6.69% of the seven-day rolling average, the highest record since the pandemic began. Health officials say that a positive rate of more than 5% may indicate a high rate of community transmission and insufficient testing.