According to reports, an Ohio woman was beaten and arrested for not wearing a mask in the stands during a middle school football match.

About 300 people participated in a football match at Marietta City School. A shot of Marietta’s Alecia Kitts being handcuffed was filmed in Logan City on Wednesday.

At that time, Kitts and several other families and children were sitting in the stands, and footage taken by witnesses quickly spread on social media.

Video footage of the incident showed Kitts and her police officer sitting next to her mother during a heated verbal argument over masks.

It is not clear what was said initially, but Kitts repeatedly refused to arrest her due to the officer’s efforts to handcuff her.

When Kitts screamed, fans in the stands turned their attention to the quarrel, and a little boy began to cry.

Kitts and the officer continued to fight each other until he asked Kitts to put his hands behind his back. 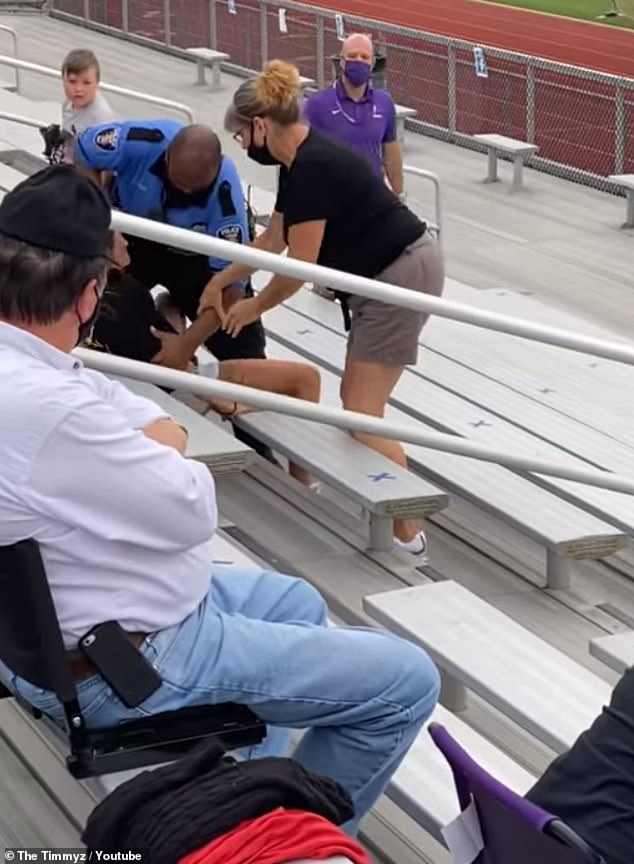 A woman named Alecia Kitts was arrested and beaten by a police officer in Logan, Ohio on Wednesday because he did not wear a mask during a middle school football game. 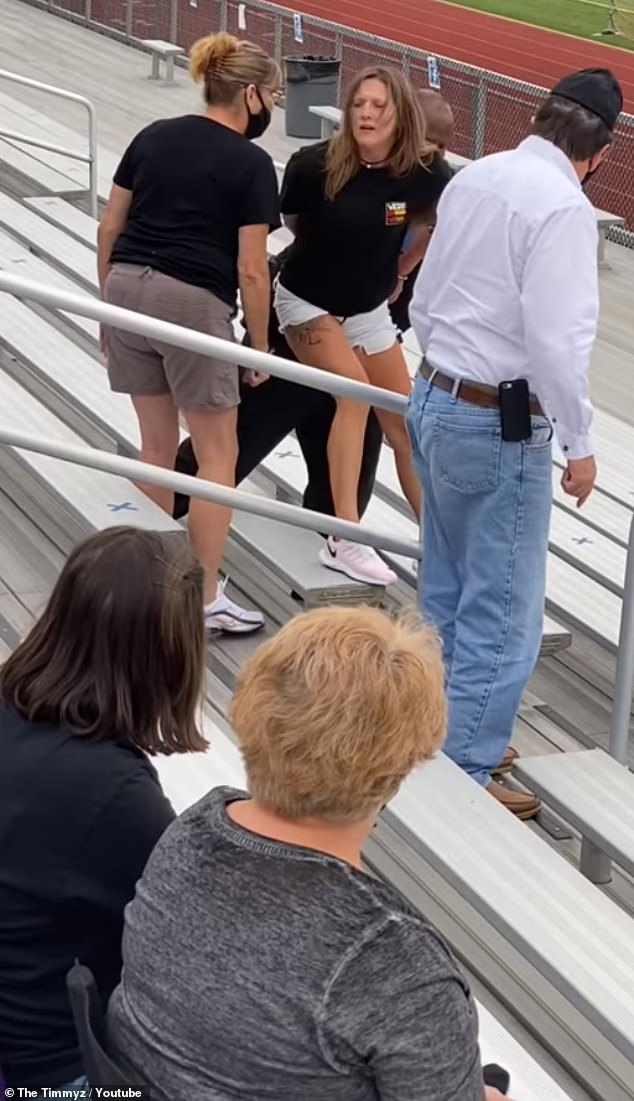 Kitts (center) refused to arrest and repeatedly tried to avoid being handcuffed. He said: “You didn’t arrest me for no reason. I did nothing wrong.”

She responded: “You didn’t get nothing, I did nothing wrong.”

On the one hand, when the police officer stood on her and Kitts desperately tried to handcuff her, Kitts’s body fell between the two stands, and Kitts’ mother watched in shock.

After struggling for at least two minutes, the officer took out his taser and deployed it to Kitts.

Kitts, who was still sitting in the stands, let go of the screams, and nearby witnesses rushed towards the police officer.

A person familiar with the matter said that she did not wear a damn mask on the grounds of this lady.

Kitts’ mother tried to appeal to the police by saying “this is just a mask”, but her daughter was detained. 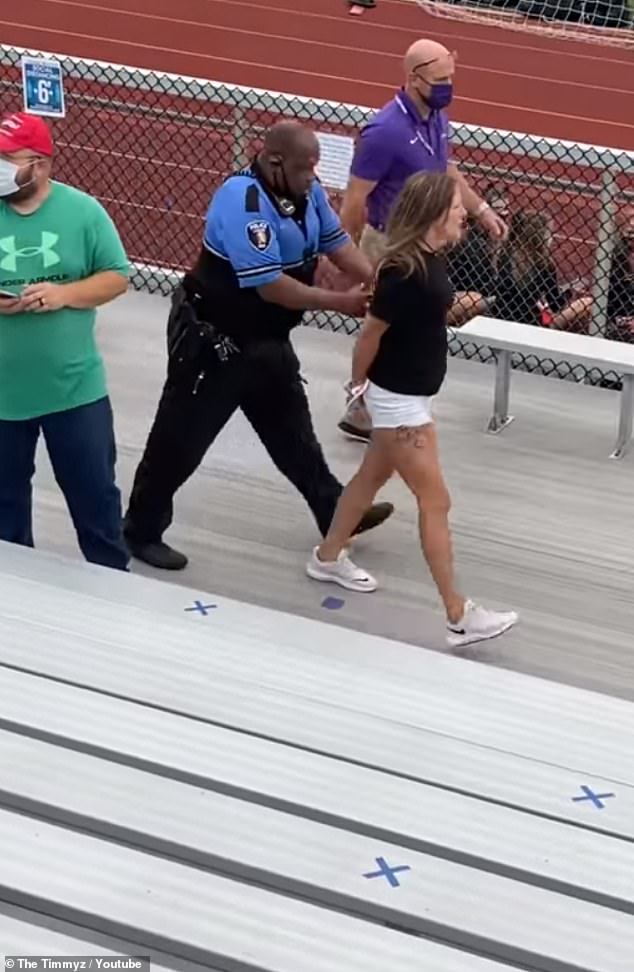 Police officers (center) deployed an assault rifle in Kitts (right), then escorted it out of the stands and left the middle school football game 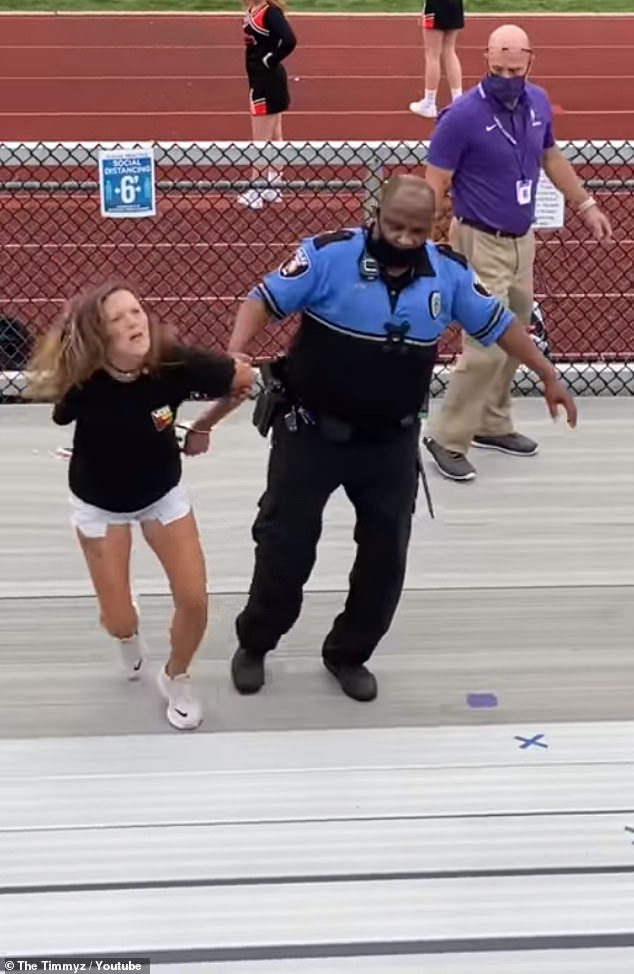 Superintendent Will Hampton: “If you choose not to wear a mask, then you are not only threatening our ability to play sports, but also your ability to watch games.”

When the police officer escorted Kitts away from the middle school football game, despite being handcuffed, she tried to grab the handrail provocatively.

According to the Marietta Times, Kitts appeared to be wearing a mask with the American flag in her back pocket. She cheered for the visiting team in the Marietta City School game.

Logan Athletic Director Theresa Schultheiss told the publication that out of the 300 people participating in the competition, only Kitts and her mother “have compliance issues.”

She said that this rule has been in effect since being told that we can participate in the competition.

“Everyone who came through ticketing tonight is reminded. We make regular announcements on the public radio to remind you that you need to cover your nose and nose. We have a sign in the bathroom.”

MCS Sports Director Cody Venderlic added that one of the biggest problems they have faced so far is the behavior of visitors and parents.

He told The Marietta Times: “I am grateful that Marietta did not happen, but what makes me sad is that it was Marietta who was in Logan. (Logan) triggered this incident.

“As sports directors, we have also talked about this. The biggest challenge in dealing with visiting fans is that people perform better at home than on the road.” 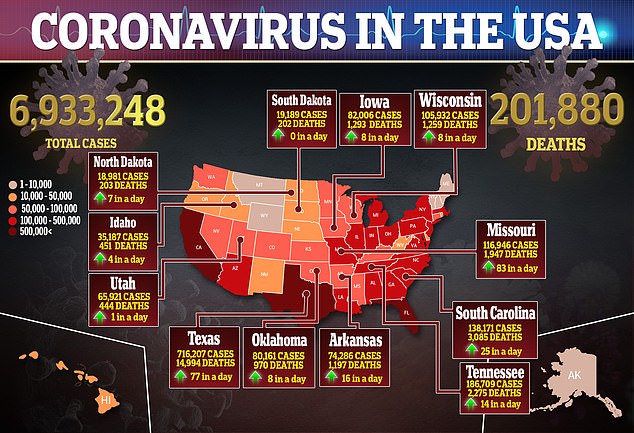 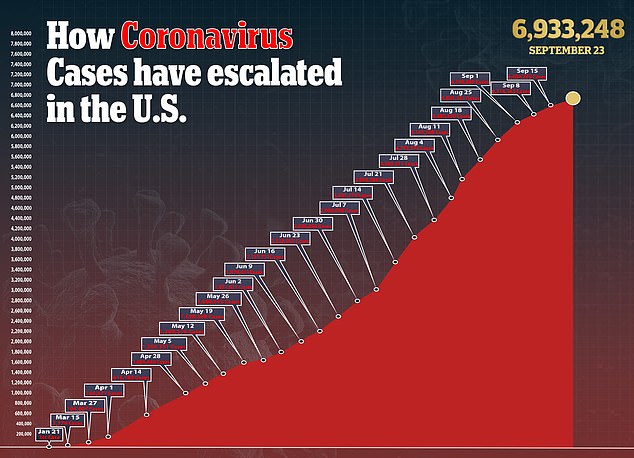 Will Hampton, the principal of Marietta City School, said he was “disappointed” by the incident.

“On the contrary, we are talking about someone who doesn’t follow the rules and boast.”

Skylar Stewart, who has a son with Kitts, shared the video online and lodged a complaint with the Logan Police Department.

The United States has just over 200,000 deaths and 6.9 million infections.

The Logan Police Department stated that the matter is under investigation.