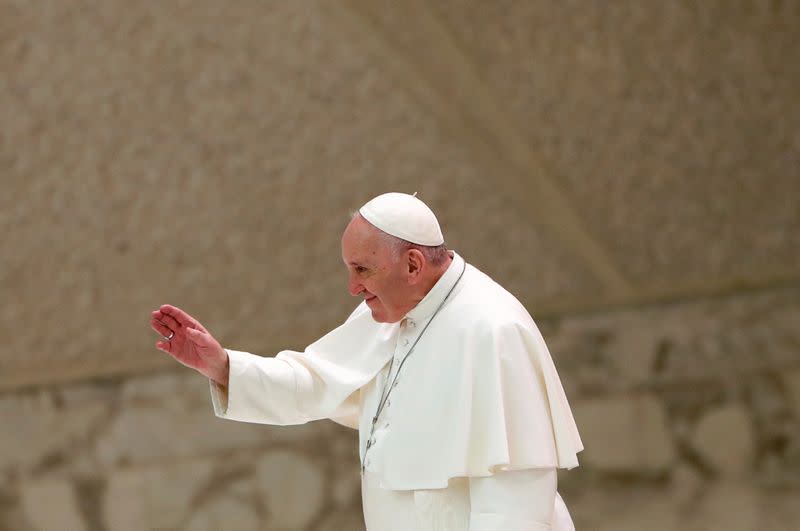 Vatican City (Reuters)-Pope Francis said on Wednesday that the COVID-19 pandemic is a difficult “lady” mission leader who must obey, but he and most of his close assistants did not wear masks in the general audience .

At the beginning of the indoor audience, Francis apologized to the people who did not get off the marble platform.

He said to hundreds of people who were almost wearing masks: “I will stay here. I really want to come down and say hello to each of you, but we must keep our distance.”

He said: “If I fall, people will immediately form a group… This is contrary to care and preventive measures. We have to face this lady named COVID, who has caused us a lot of harm.”

The pope and most of the assistants and translators on the stage did not wear masks. The Swiss guards and official photographers on stage wore masks, but the bishops and priests who greeted the pope’s closing ceremony took off their masks when they approached him.

13 residents of the Swiss Guard and the Pope’s hotel were recently tested for COVID-19.

The pope had a part of his lungs removed due to illness when he was young, but because he did not always wear a mask in public, he was criticized, mainly on social media.

On October 20, he wore a mask with other religious leaders in Rome for a few hours, only taking it off when speaking. Last Saturday, no one in the Pope’s private library wore a mask when speaking with Spanish Prime Minister Pedro Sanchez and his delegation.

In a video conference call with reporters on Tuesday, Father Augusto Zampini, a member of the Pope’s Vatican Committee established by the pope to advise him on the social impact of the crisis, admitted Francis’ inconsistencies.

Zampini said: “We are trying to convince him, we are almost there.”