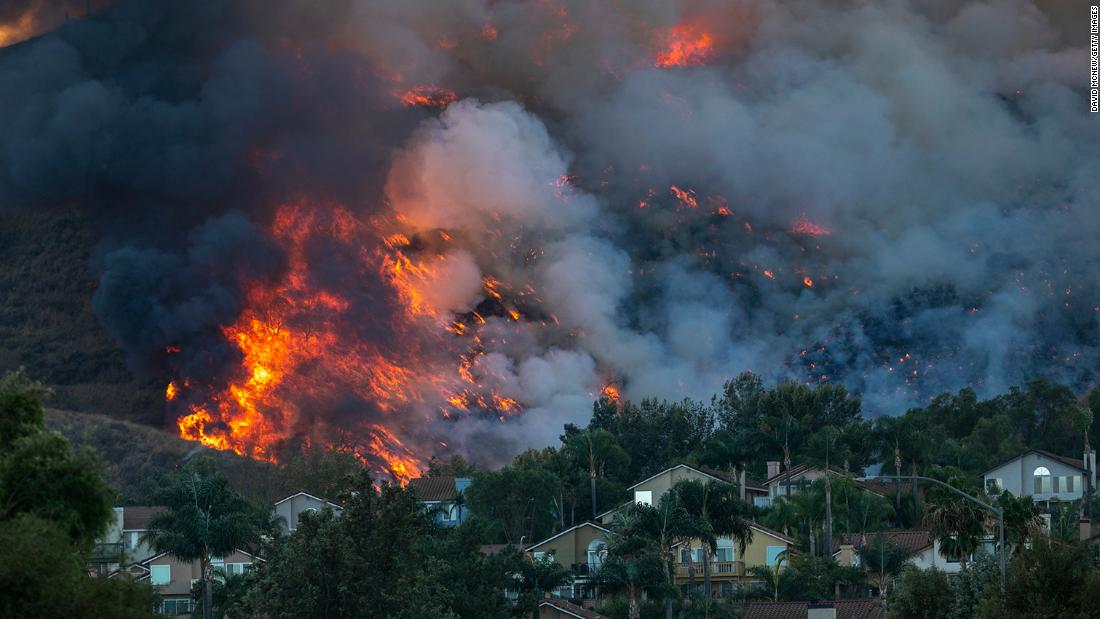 Since Monday, fast-moving fires driven by high winds and low humidity have spread rapidly, causing damage to at least eight houses and threatening thousands of houses.

According to the National Interagency Fire Center, more than 8.5 million acres of land have been burned across the country so far this year. According to CNN, Colorado, New Mexico, Idaho, Oregon, and Washington have experienced devastating fires, killing at least 44 people this year.

According to the latest news from Cal Fire, as of late Tuesday night, the Blue Ridge Fire in Yorba Linda, Orange County had scorched 14,334 acres. There are no reports of containment procedures.

According to the latest news, seven buildings were damaged, one of which was destroyed in the fire, which also threatened more than 20,000 other buildings.

On Tuesday, extreme fire weather in the area (including strong winds of 30 to 50 mph) pushed the flames to Chino Hills northeast of Yorba Linda.

Cal Fire said in the latest news that the wind is expected to weaken to 20-25 mph overnight, and firefighters hope to use this time to establish a containment line around the fire.

On Tuesday evening, the California Fire Update reported that the Silverado Fire had burned 13,354 acres near Irvine since early Monday morning, about 20 miles south. The cause of the fire is under investigation and contains 5%.

According to Cal Fire, no buildings were lost or damaged, and more than 1,200 firefighters were on fire.

Orange County Fire Department Chief Brian Fennessy said at a press conference on Tuesday that two firefighters were seriously injured in the fire and were “fighting for their lives.”
A message on the area’s website stated that the Irvine Unified School District chose to cancel schools on Wednesday due to the continued and significant impact of the Silvador fire on the entire city of Irvine.

Orange County Fire Department PIO Captain Jason Fairchild told CNN that although some evacuation orders in parts of Irvine have been cancelled, about 70,000 residents are still receiving evacuation orders.

According to the Chino Valley Fire Department, as of Tuesday morning, about 30,000 residents from Yoba Linda and Chino Hills had been evacuated.

Governor Gavin Newsom announced that the state has received federal funding to support the response to the Blue Ridge and Silverado fires.

Animals evacuated from the Silverado fire

As the fire spread, many animals were rescued from the area.

OCFA said in a tweet that on Tuesday, a firefighter rescued a warehouse from the Silverado fire on a drill rig. “He is safe and is currently under animal control.”
The Orange County Zoo near Irvine Regional Park was ordered to evacuate due to the Silverado fire and had to evacuate its furry residents.
The Santa Ana Zoo is housing about 150 animals and is about 15 minutes away from the OC Zoo. Most are native to the southwestern United States and include raptors, bobcats, coyotes and reptiles. Santa Ana Zoo manager Ethan Fisher told CNN that raccoons and beavers also trudge throughout the city.

This was the second time the animals had to be moved due to wildfires. The last time was in October 2017.

Zoos usually make emergency plans, just in case, OC Zoo will reserve additional kennels and supplies for such incidents. Zoo staff will also be transferred to take care of the moved animals. The animals are not on display.