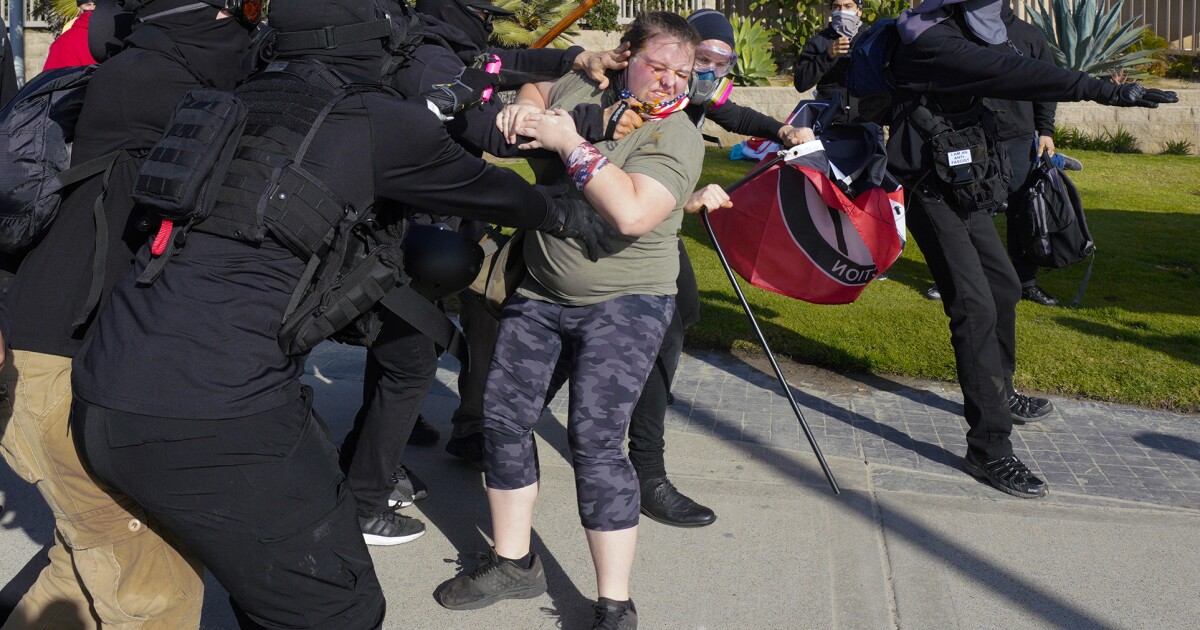 On Saturday, about 100 Trump supporters and dozens of counter-demonstrators faced off in San Diego’s Pacific Beach Center for several hours. Some of them called themselves anti-fascists. After several skirmishes, the officers tried Isolate the opposition.

A dueling demonstration closed the Mission Boulevard near Crystal Pier.The police declared the gathering illegal and ordered the crowd to disperse at around 2:30 pm

The police reported on Twitter that the officer was hit by a glass bottle. The police also said that rocks and eggs were also thrown at the police, and pepper spray was deployed in their direction from the crowd. They did not say who is responsible.

During a confrontation, the officer fired what appeared to be a bullet at the anti-fascist crowd.

By 4:30 pm, supporters of President Trump rallied again on the boardwalk, and the police allowed them to march. Demonstrators yelled and blasphemed and sometimes clashed with passersby.

“We will continue to monitor these two groups to promote peaceful protests. However, we will not tolerate violence,” the police tweeted around 5 pm: “When throwing stones, bottles, peppers and For other items, actions will be taken against those who commit violence.”

Opposition protesters held signs of condemning Trump and stated that “there are no Nazis in PB.”

Before the Trump incident, some counter-demonstrators had sporadic screaming matches with Trump supporters along the boardwalk. Once, someone made a call from an unidentified person on the boardwalk and pushed forward and knocked him down with a little boy.

At that moment, grumpy, some non-protesters on the boardwalk walked towards the group, including a man with a dog on a leash, barking at the counter-protesters.

A video posted on Twitter showed a person walking to the side of anti-fascism and overthrowing a protester writing in chalk on the street. When the other protesters faced the man, the police officer pulled him away and left the police line.

Both parties waved pepper spray, which was deployed at different times during the conflict.

In the afternoon, about 100 Trump supporters gathered in the corner of Mission and Hornblend.

Rows of police officers separated the group, and some of the anti-fascist demonstrators mocked the police.

The police announced an illegal assembly at around 2:30 pm and began asking people to disperse.

A tweet from the San Diego Police Department said: “Those who stay or return for violating this legal order may be extradited/arrested and may be threatened by chemical agents and low-lethal applications.”

The crowd cleared the area before 6 pm. It is not clear whether there were any arrests.