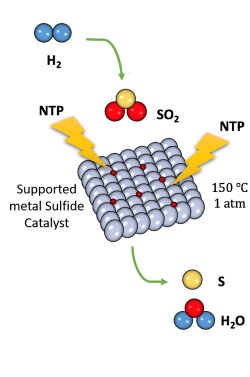 Scientists from Pennsylvania State University said that the use of a single-step plasma-enhanced catalytic process to convert sulfur dioxide in the tail gas into pure sulfur may provide a promising and environmentally friendly process for the current multi-stage thermal, catalytic and absorption process Alternative.

Wang Xiaoxing, an associate researcher at the EMS Energy Research Institute of Pennsylvania State University, said: “Sulfur dioxide can cause major environmental problems such as acid rain and may cause ocean acidification.” “Sulfur may also cause fine particles in the air we breathe, which may be more Sulfur dioxide itself is more serious.”

According to the “Lancet” Global Burden of Disease Study (released in 2015), it is estimated that exposure to particulate matter will cause 4.2 million premature deaths and more than 100 million disability-adjusted life years, which can be measured due to illness, disability or death The number of years of loss caused.

Wang believes that current desulfurization methods can successfully remove sulfur dioxide from the exhaust gas, but they are not without obvious shortcomings.

For example, flue gas desulfurization technology is the most common method to capture sulfur dioxide, but these processes generate a large amount of solid waste, which needs to be treated in the form of metal sulfate. In addition, these processes produce waste water that requires additional treatment, making the entire process costly and environmentally unfriendly.

In addition, sulfur dioxide can be reduced to solid elemental sulfur by catalysis (a chemical reaction caused by a catalyst and usually a reducing agent, such as hydrogen, methane, or carbon monoxide), and then used as a raw material for fertilizers. However, high temperatures are usually required in traditional catalytic methods to achieve high conversion rates. According to scientists, this is not ideal because it consumes a lot of energy and reduces the activity of the catalyst.

Because of these shortcomings, Wang and his colleagues tested a novel technology, a step-by-step low-temperature plasma-assisted catalytic process, which eliminates the need for high temperatures and generates less waste than flue gas desulfurization technology. many.

To test this process, the research team put iron sulfide catalyst into a packed bed reactor. Then, they introduced a gas mixture of hydrogen and sulfur dioxide, which passed through the catalyst bed at a temperature of about 300 degrees Fahrenheit. Then, they turned on the non-thermal plasma, and the reaction immediately began to occur.

After completing the process, they analyzed the samples to see how much sulfur dioxide was in the gas and how much hydrogen was consumed. They also collected and analyzed the solid sulfur that had accumulated at the bottom of the reactor.Their results are published in ACS Catalysis And the most recent issue Chinese Journal of Catalysis.

Wang said: “We use a temperature of 150 degrees Celsius (about 300 degrees Fahrenheit), which is higher than the melting point of sulfur to avoid sulfur deposits on the catalyst.” “Through this process, the catalyst showed excellent stability. Number of runs After hours, we did not see any deactivation. The activity and selectivity remained unchanged.”

The researchers also found that the process greatly promoted the reduction of sulfur dioxide at low temperatures, and the use of hydrogen and methane increased the conversion rate by 148% to 200% and 87 to 120%, respectively.

Sean Knecht, an assistant professor in the School of Engineering Design, Technology and Professional Planning, said that NTP works because high-energy electrons interact with gas molecules to produce reactive substances (radicals, ions and Excited molecules), which can carry out various chemical reactions at low temperatures.

Necht said: “The result is that electrons can dissociate and excite reactants at a much lower temperature than thermocatalysis to initiate chemical reactions that seem to be thermodynamically unfavorable.” “As we have shown, if these reactions can be It is carried out at a temperature much lower than the typical temperature of thermal catalysis, then the input power of the future system will be greatly reduced, which is a big problem.”

Wang added that using plasma allows them to achieve the best performance with only 10 watts of electricity. Another advantage is that renewable energy sources (such as wind or solar energy) can be easily applied to this process to power the plasma.

Now, researchers hope to better understand how plasma promotes the catalytic process and seek to develop more effective catalysts for this process.

Knecht said: “The current challenge we are trying to solve is to further isolate the influence of the plasma from the influence of the catalyst and the synergy.” “We are currently studying some surface spectroscopy options with a combination of computational models to some extent. Combine them Together, we can provide a more comprehensive understanding of the physics and chemistry being used.”

If the process can be commercialized, it may replace the current FDG technology to a large extent.

Wang said: “This is very good for energy and the environment.” “Our process can save energy, reduce waste and save water. This is very transformative.”

Citation: The new sulfur dioxide conversion method may change the current industrial technology (October 28, 2020), which will be available from https://phys.org/news/2020-10-sulfur-dioxide on October 29, 2020 -conversion-method-current.html search