More than 4,000 people died in Brazil for the first time in 24 hours 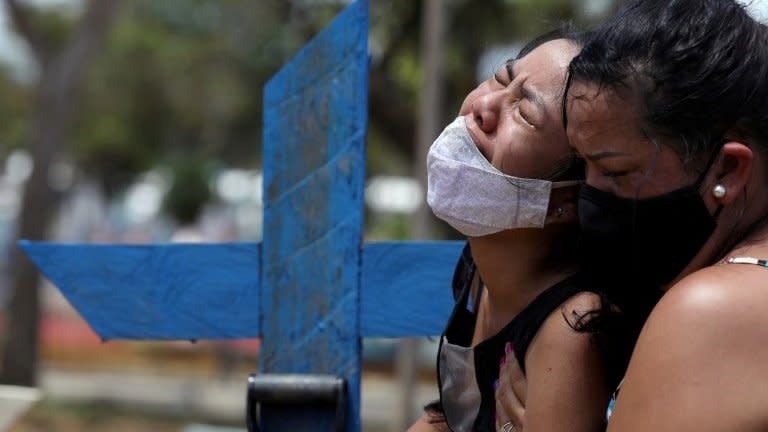 Brazil recorded more than 4,000 Covid-related deaths for the first time in 24 hours due to a surge in more infectious variants.

Hospitals are overcrowded, people in some cities have died while waiting for treatment, and health systems are on the verge of collapse in many areas.

The country’s total death toll is now close to 337,000, second only to the United States.

But President Jair Bolsonaro continues to oppose any containment measures to contain the epidemic.

He argued that the damage to the economy would be worse than the damage caused by the virus itself, and tried to overturn certain restrictions imposed by the local authorities in the courts.

In a speech to supporters outside the president’s residence on Tuesday, he criticized the quarantine measures. There is no evidence that these measures are related to obesity and depression. He did not comment on the 4195 deaths recorded in the past 24 hours.

According to the Ministry of Health, Brazil has recorded more than 13 million coronavirus cases so far. In March, about 66,570 people died of Covid-19, more than double the previous month’s record.

“Brazil now… poses a threat to the entire effort of the international community to control the pandemic,” Dr. Miguel Nikolalis, who has been following the country’s case closely, told the BBC.

He said: “If Brazil is not controlled, then the earth will be insecure, because we will brew new variants every week…they will cross the border.”

What is the situation in Brazil?

According to the health agency Fiocruz (Portuguese), in most states, Covid-19 patients account for more than 90% of intensive care unit beds.

Some states report that oxygen and sedatives are in short supply. Despite the grim situation, some cities and states are already relaxing measures to restrict the movement of people.

Miguel Lago, executive director of the Brazilian Institute of Health Policy who advises public health officials, told the Associated Press: “The truth is that President Jair Bolsonaro’s anti-blockade The speech won the victory.”

He said: “Mayors and governors are politically prohibited from strengthening social distancing policies because they know that the president’s supporters, including business leaders, will undermine them.”

The far-right president played down the virus, cast doubt on vaccines, and defended unproven drugs as treatments. His reputation plummeted when his handling of the crisis was severely criticized.

He recently changed his attitude towards immunization, promising to become the year of vaccination in 2021. However, the country has been struggling to launch the plan.

Critics say his government is making slow progress in negotiating supplies. According to the trackers of Data World, only about 8% of the population has received at least one dose.

Epidemiologist Ethel Maciel said Brazil is in a “terrible situation” and told AFP: “At the rate we are getting vaccinated…the only thing that slows the rapid spread of the virus The method is to effectively lock it for at least 20 days.”

What is the Brazilian variant?

Fiocruz said that it has detected 92 variants of the coronavirus in the country, including P.1 or Brazilian variants, which has attracted attention because it is considered to be more contagious.

According to data analyzed by Brazilian researchers, it is believed that the disease has appeared in the Amazon state in November 2020 and spread rapidly in the state capital of Manaus. By January 2021, the disease has accounted for 73% of the disease cases.

Experts worry that the proliferation of Brazilian variants will mean an increase in cases within a few months.

Dr. Nicolelis has only recently served as the coordinator of the pandemic response team in Northeast Brazil. He told the British Broadcasting Corporation (BBC) that the country’s response amounts to a “complete disaster”.

He said: “This is the biggest human tragedy in Brazilian history.”

He said: “By July 1st, our death toll may reach 500,000. This is the latest estimate.” “But the University of Washington released an estimate on Friday indicating that if the transmission rate rises by about 10%, we will have 600,000. People die.”

The Brazilian variant has also been linked to a surge in infections and deaths in many South American countries.