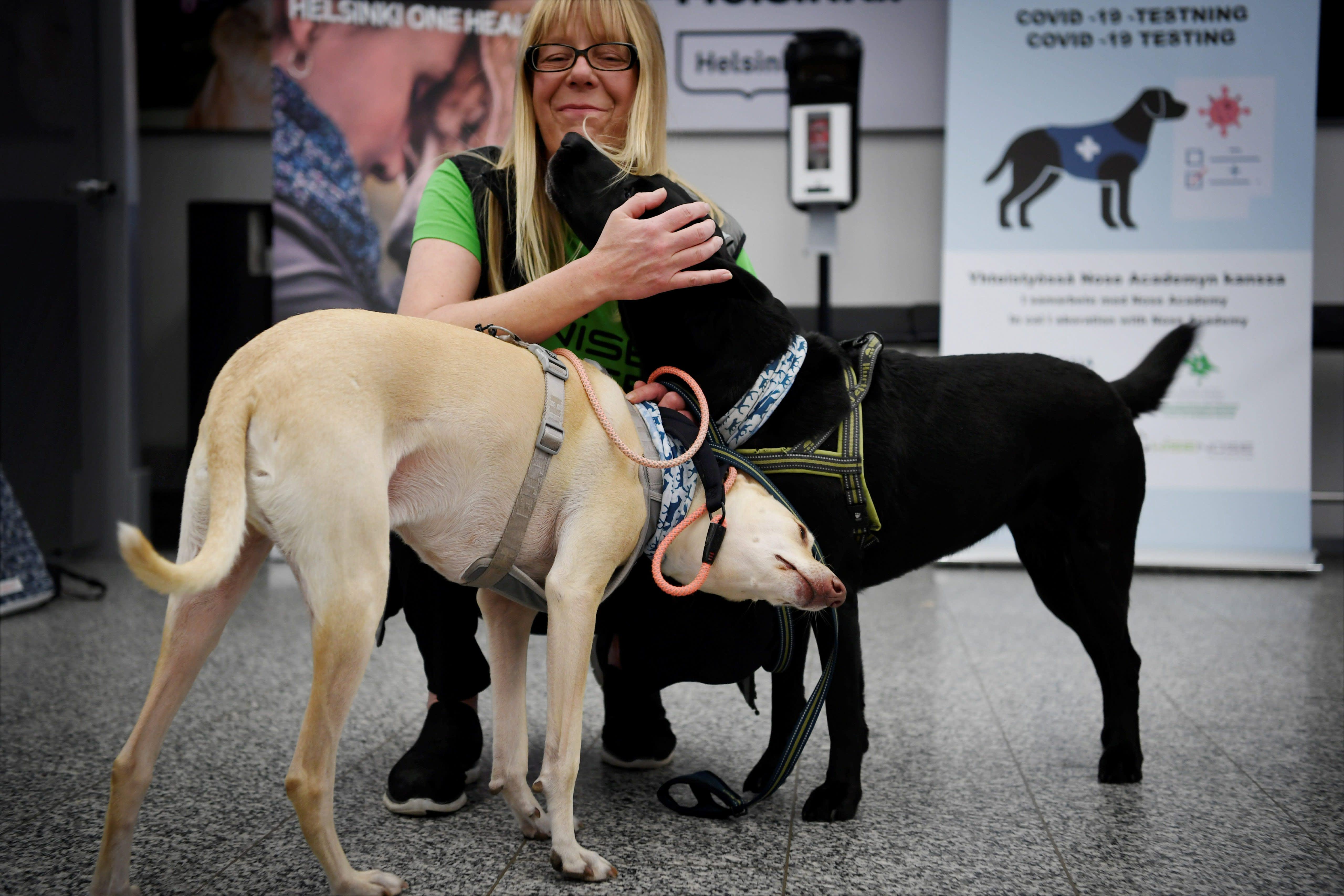 Coronavirus sniffer dogs named Kössi (L) and Miina hugged with trainer Susanna Paavilainen at Helsinki Airport in Vantaa, Finland. They were trained on September 22, 2020 and detected Covid-19 from arriving passengers.

Dogs trained to detect coronavirus started working at Helsinki Airport in a pilot project this week, hoping that their sensitive noses can speed up the process of identifying potential viral vectors.

The person in charge of Helsinki-Vantaa Airport in Finland, operated by Finavia, said that this was one of the first airports to pilot the project. The field witnessed several well-trained dogs sniffing Covid-1

9 stationed at the airport, and Standard test procedures. .

“We are one of the pioneers. As far as we know, no other airport has attempted to conduct such a large-scale canine odor detection for Covid-19. We are satisfied with the Vantaa City initiative. This may be another step forward. One step to defeat Covid-19,” Ulla Lettijeff said.

Several studies have found that dogs can sniff out viruses with almost 100% accuracy, and can even detect viruses before they show any symptoms. A research team from the Faculty of Veterinary Medicine of the University of Helsinki conducted preliminary tests in May and found that trained odor detection dogs “may be even better than the current Covid-19 test based on molecular technology.”

Then in July, Hannover University of Veterinary Medicine, Hannover Medical School and the German Armed Forces conducted a study, and they found that if they are well trained, dogs can distinguish between SARS-CoV-2 and non-infected samples with an overall success rate of 94% .

The dogs used in the Helsinki Airport Pilot Program will not have direct contact with anyone undergoing testing at the airport, and testing is voluntary. Finavia pointed out that anyone undergoing the test will wipe the skin with a test wipe and put it in the cup, and then give it to the dog, adding: “This also protects the dog’s operator from infection.”

All tests are conducted anonymously. If the test result is positive, passengers or airport staff are advised to perform routine coronavirus tests to ensure that the results are correct.

The Covid-19 dogs deployed in the Helsinki Airport pilot project have been trained by Wise Nose, an organization specializing in odor detection, and have been trained with Anna Hielm-Bjorkman, a professor in the Department of Veterinary Medicine of the University of Helsinki.

She told CNBC that the pilot aims to understand how dogs perform and respond to odor detection in a real work environment (rather than in a controlled laboratory environment), and will also conduct research on the detection performance of dogs to understand their Match the PCR test that is currently widely used. However, if the pilot proves to be successful, it can be extended to other places.

She told CNBC: “For testing the coronavirus, they (dogs) are indeed the best thing we can have.” She said: “They are cheap to train, they only take one minute to test, and they are non-invasive. She pointed out that the superb skills of dogs have been used to detect explosives, drugs and missing persons. Other work situations, and “this is just a new situation.”