COVID in Oregon: 544 cases, 33 deaths due to the governor’s withdrawal from the indoor dining ban 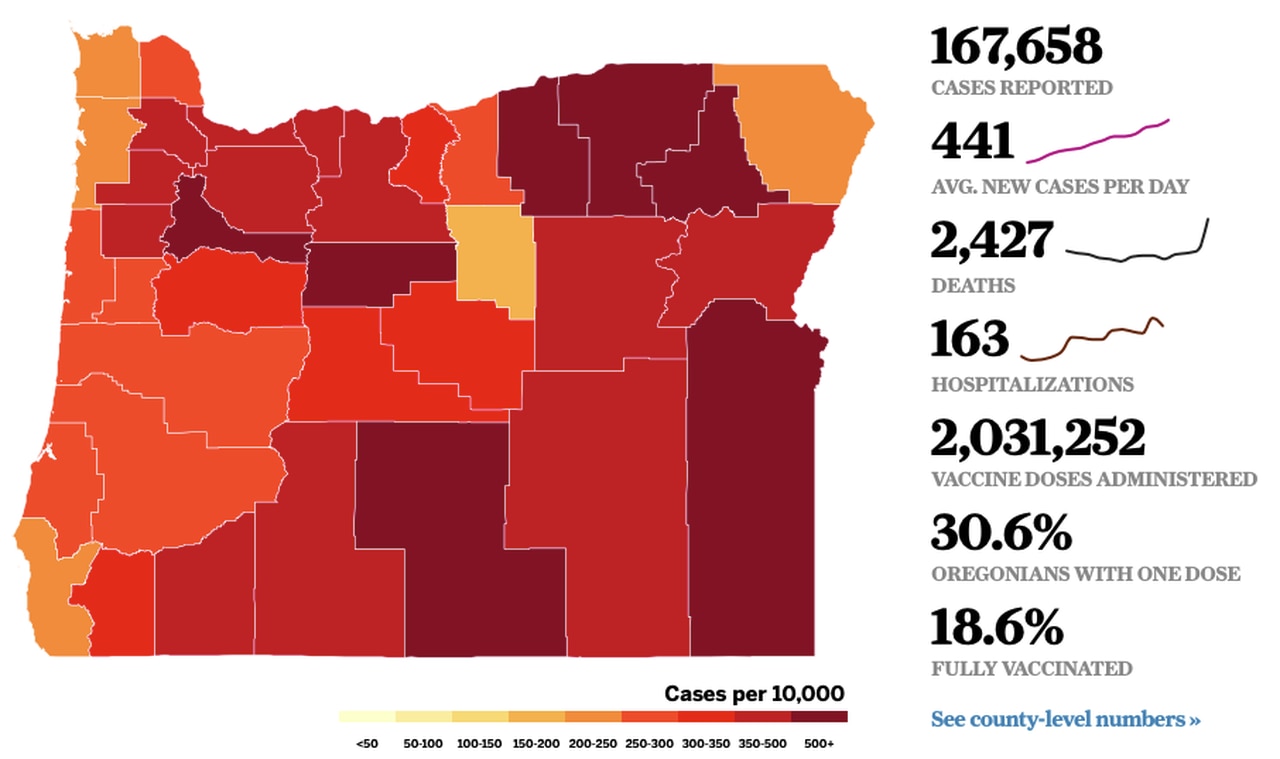 Governor Kate Brown significantly revised the long-term COVID-19 benchmark on Tuesday, apparently to keep restaurants and other businesses operating as they were, avoiding bans or strict restrictions on indoor activities.

Brown put forward a new requirement that only when Oregon sees the number of effective hospitalizations for COVID-19 across the state surge to 300, indoor dining will be banned, which is twice the current number and an average daily hospitalization per week. The rate increased by 1

As the number of cases and hospitalizations has increased in recent weeks, Brown has revised it, and the state reported 544 new cases and 33 deaths on Tuesday-although many deaths may have occurred a few weeks ago.

Brown effectively created a buffer for the business, to some extent, undermined her public information from last week, calling on people to renew their efforts to slow the spread of the coronavirus, which is for more before the variants of the coronavirus become too rampant. Part of a race to vaccinate Oregonians.

This change means that Josephine, Klamath, and Tillamook counties will avoid entering the state’s “extremely dangerous” category, which has the most stringent restrictions on businesses, such as banning indoor dining and imposing restrictions on gyms and gyms. The number of people in the theater is strictly limited.

Brown spokesperson Charles Boyle said that the governor is comfortable with changing her standards because Oregon is vaccinating against COVID-19-which was not the case when she launched the business restriction indicator last fall.

Boyle said in a statement: “Hospitalization is an indicator of serious illness in our community.” “By linking extreme danger to statewide hospitalization, we will ensure that hospital capacity is not threatened. , We do not impose the highest level of restrictions on regulations.”

Oregon reported 163 active hospitalizations on Tuesday. A model released by the Oregon Health and Science University last week showed that if the feared spring tide hits, Oregon may add about 300 hospitalizations in May, which means restaurants may face at least one month of indoor dining bans.

Large counties are eligible for “extreme risk” and the strictest restrictions if they have at least 200 cases per 100,000 residents in two weeks. This classification triggers the prohibition of indoor dining and indoor visits in long-term care facilities, while stadiums and theaters usually can only accommodate up to 6 customers.

The next level of large counties (“high risk”) can provide indoor access at 25% capacity, can accommodate up to 50 people, and allow indoor visits in nursing facilities.

Starting Friday, fourteen counties, including Multnomah and Clackamas counties, will now be classified as “high-risk” counties. These metropolitan areas have been downgraded due to the increase in the spread of the coronavirus, so some companies will see indoor capacity drop from 50% to 25%.

Boyle pointed out that counties moving backward, such as Multnomah and Clackamas, must still abide by the regulations he marked as “significant restrictions” on the “high risk” level.

Boyle said: “Now, we need Oregonians to strictly abide by effective health and safety measures, and get vaccinated as soon as possible when vaccines are available, so that we can stop the spread of COVID-19.”

vaccine: The State of Oregon reported 32,955 doses of newly administered doses, including 21,170 doses on Monday and the rest for the previous few days.

Who died: The state did not immediately provide detailed information on the deaths of the 33 people.

Hospitalization: 163 confirmed cases of COVID-19 were hospitalized, 14 fewer than Monday. This includes 42 intensive care patients, the same as Monday.

Since the beginning: Oregon has reported 167,658 confirmed or presumptive cases of infection and 2,427 deaths, which is the country with the lowest number per capita in the United States. To date, the state has reported 2,031,252 vaccinations.