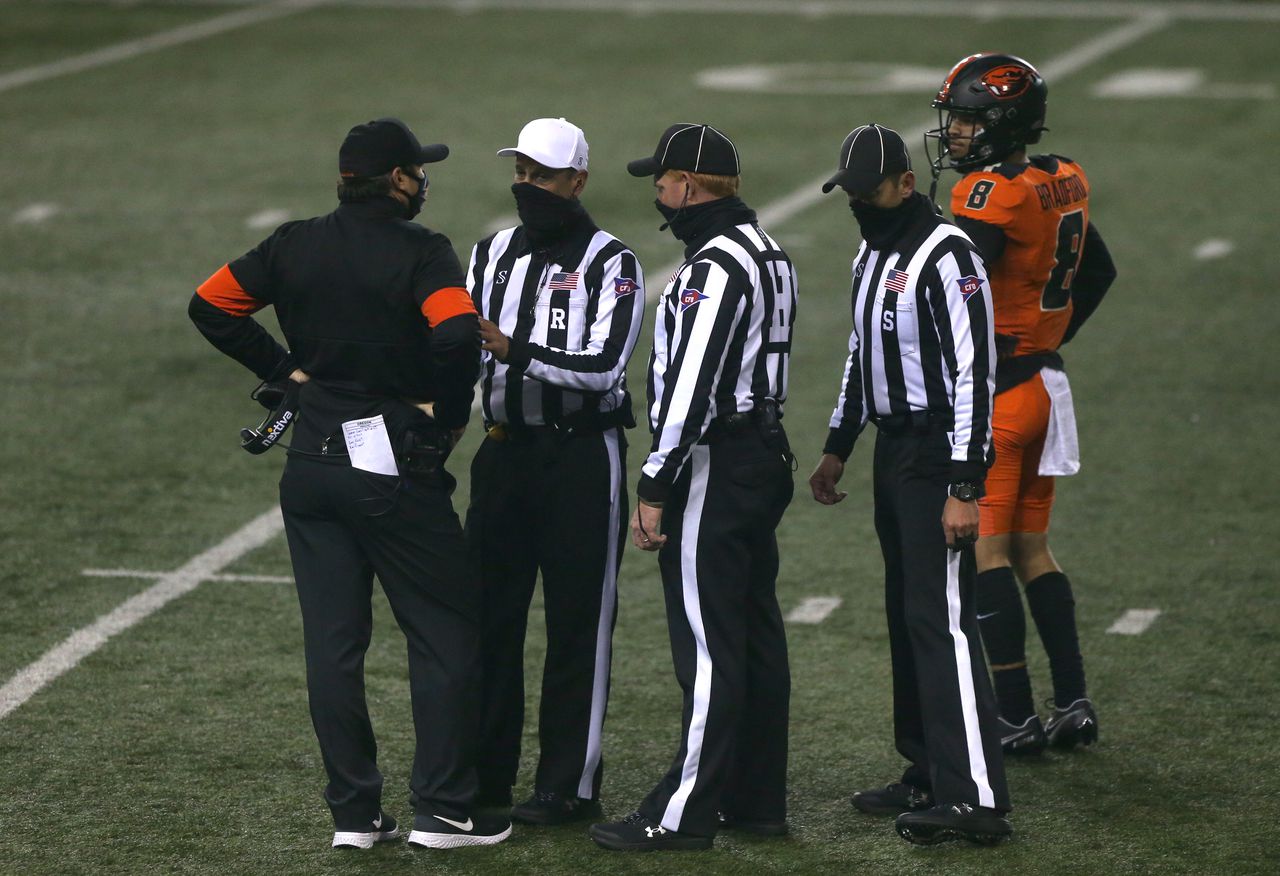 Some thoughts on Pac-12…

♦Host: I’m tired of the narratives in Pac-12 every weekend and turn to the host’s inconsistency and brutality. For fans, this is still an obvious issue of credibility and trust; the real weakness is the killer of conference brands. On Friday, ESPN spectators watched in horror as the dramatic results of Oregon State and Oregon State University were contaminated by the poor referee sequence on the goal. This has become the norm. Every weekend. Groundhog Day. This will not stop until the General Assembly seriously considers outsourcing the recruitment, training and retention of the best college football officials.

♦Where is the reference?: I have been thinking…for health reasons, does COVID-1

9 force some of the best and most experienced Pac-12 officials to withdraw from the season? Or did the Pac-12’s initial decision to postpone this season force the best officials to seek work outside of the meeting? Are we looking at the absolute best official Pac-12 can provide? I’m not the only one who noticed that the top officials of the last few seasons did not appear in the Pac-12 refereeing work. I noticed that at least two of the other Power 5 conferences even popped up work games. This left Pac-12 with a little league feel.

♦Vote: This week’s “AP Top 25” poll has ended. The Pac-12 program did not enter the top 16. The University of Southern California ranked 17th. Oregon dropped to 21st. Washington ranks 23rd. For the best shows, it’s really difficult if you don’t participate in the top ranked teams. When they are idle (USC) or win (Washington) or lose to an unranked opponent (Oregon), it is also difficult for them to increase turnout.

♦North: Who won the Pac-12 North Division? The quick answer is to win the Oregon-Washington game on December 12. The Eskimos (3-0)’s comeback against Utah saved the importance of the upcoming conflict with the Ducks (3-1). If both win, Oregon-Washington will be the highlight of the conference. However, if ducks and huskies have to face plants, Oregon (2-2) will lurk. Washington will host Stanford University this week. Oregon played in Karl. I will give a score forecast later this week.

♦South: Colorado vs. USC is a game everyone wants to watch. It was cancelled due to COVID-19, which gave us no solution and may not work. Buffalo (2-0) is in Arizona this week. The Trojans are playing in Washington State. Pay close attention to the cancellation of both parties.

♦Communication: My weekly newsletter has a Pac-12 style. Dropped on Thursday. If you want to subscribe, this process takes about five seconds. All you need is your email address and zip code.

♦University of California, Los Angeles: The Bears (2-2) climbed to .500 again under the leadership of Chip Kelly. I spoke with Kelly on the phone this week and we talked about his team’s performance in a fiasco in Oregon two Saturdays ago. They ran well, but Kelly talked about turnovers and focused on the ball. UCLA rushed for 281 yards in Saturday’s game against Arizona. Turnover rate: 0.

♦Spotlight: I want to see how Oregon State reacted to Caller after losing the game against Oregon State University. After the loss, the duck sounded embarrassing. Mario Cristobal talked about using it as fuel. What kind of fuel? We will find out soon. Carl has been very unstable and has just been penalized on a special team, with turnovers and free kicks.

♦Name: I contacted Oregon and Oregon’s high-level athletic department sources and asked them about their status during the renaming of the Civil War. The decision to delete this name was in the summer. I think this is an opportunity to wait so long, but neither side seems to have the motivation to rename the thing. I began to wonder if they would be renamed.

A source said: “With everything else going on, this is not a top priority for any school. I think it will take a while.”

Rain bowl? How about the Willamette Cup? Or the 44-mile war? Or Prati? Old game?Any more

Another high-profile source said: “In this environment, no matter how good the name is, it will not be accepted.”

♦Monkey: Gemma Jefferson of Oregon State University rushed for 120 yards, 133 yards, 196 yards, and 226 yards in consecutive weeks. He has 675 yards and 7 TDs. Everyone watching OSU knows that Jefferson will be successful. What I found most striking was how the Beavers coaching team continued to make Jefferson successful despite the lack of surprises.

Smith said: “Our O line is narrow at the end and we are in some tight positions. You have to put down obstacles here and make tackles.” “We want a balanced offense, but he is a good one. The player, everyone on both sides knows that he will have possession of the ball. Just like we know they will participate in some games, now you have to stop the game.”

♦PSYCH 101: I have been thinking about losing the team for several weeks. Players who have to play this season must play. They will be eligible for one year. In some states, they face uncertainty and strict restrictions. I know that the teams chasing the world championship are mentally locked. But for the teams that are about to enter the end of the season, what will happen in the next 2-3 weeks? I hope that if we will see a cancellation trend, it may be reflected in less competitive plans. It’s just a theory.

♦Utah: Is anyone else confused about Utes? Alternate greatness and incompetence. Ute State will host Oregon this week. We might be able to save some time and start the game against Utah with a score of 27-23, put the ball on 5 and give the Beavers four cracks in the end area. As long as Pac-12 sends the best host, I will pay attention.

Drew Brees rumor: Saints’ QB will retire after the NO playoffs bleach report