Brain imaging of tau protein in various forms of dementia 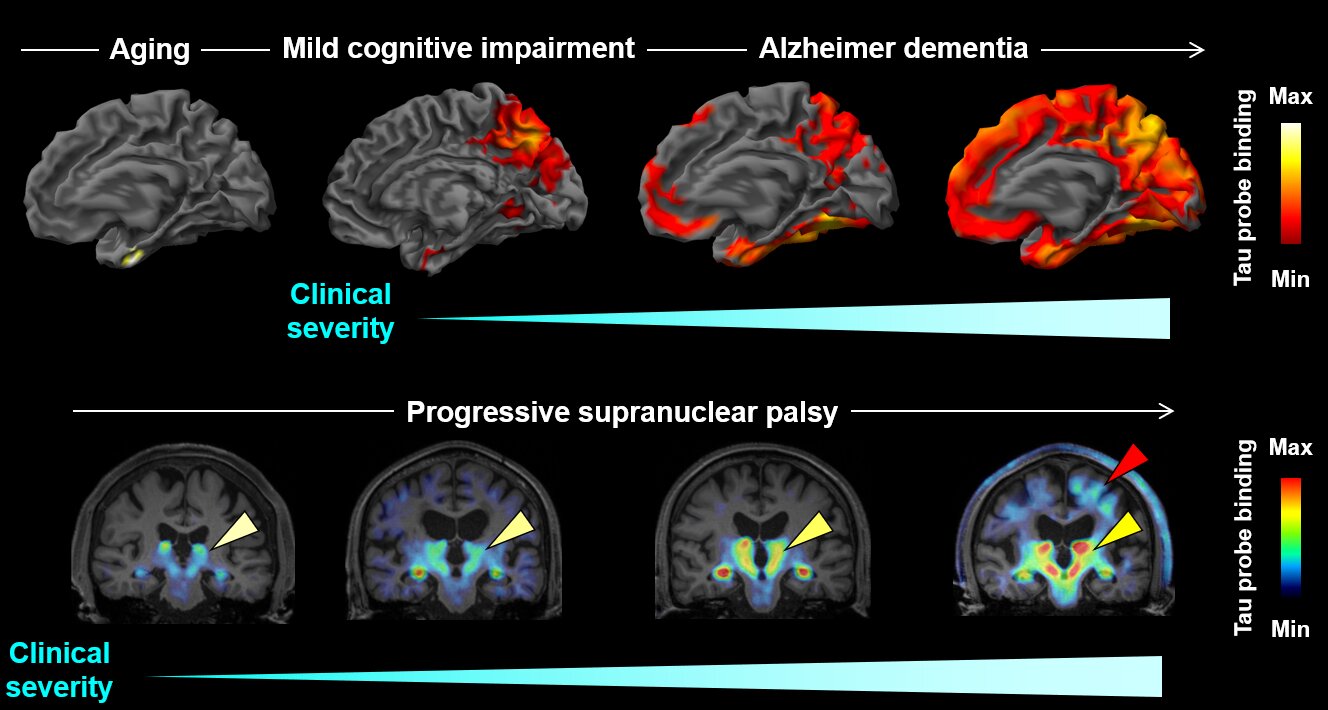 A study published in the journal on October 29 shows that a new imaging-based method can early detect and distinguish a variety of neurodegenerative diseases characterized by the accumulation of tau protein in the brain. Neurons. The researchers demonstrated that the method uses an imaging technique called positron emission tomography (PET), which can be used in mouse models and patients with Alzheimer’s disease and various frontotemporal degeneration (FTLD) diseases Sensitive detection of tau deposits. The authors say that the method can also be used to assess disease mechanisms or anti-tau therapy.

“This study provides the first proof that it is possible to capture the deposition of abnormal tau protein in Alzheimer’s disease and various FTLD diseases with high contrast, allowing individual-based diagnosis of these diseases,” the study’s common Makoto Higuchi, one of the senior authors, said. National Institute of Quantum and Radiological Science and Technology, Chiba, Japan. “This finding shows that a single PET tracer can cover the diagnosis and identification of a variety of neurodegenerative dementias, and is suitable for clinical examinations in hospitals equipped with PET scanners.”

Most age-related neurodegenerative diseases are characterized by aggregates of misfolded proteins (such as tau). Patients with Alzheimer’s disease and FTLD have abnormal tau deposits in the brain. These diseases cause progressive neuronal loss in the frontal and temporal lobes of the brain. FTLD is a pathological process of frontotemporal dementia, which may lead to behavioral, emotional and language problems.

“As tau pathology appears in specific areas of brain disease decades before the onset of the disease, it is expected that Alzheimer’s disease, FTLD syndrome and related diseases can be diagnosed and differentiated in the preclinical or early clinical stages. It depends on the presence or absence of tau aggregates and their location.”

PET can be used to observe abnormal tau deposits in Alzheimer’s disease patients. The process involves injecting molecular probes labeled with radioactive atoms into the body. However, the existing PET probe has not been used to detect tau aggregates in FTLD patients with high sensitivity. A major obstacle is that 11C-PBB3 (an imaging probe designed to observe tau deposits) quickly decomposes after injection and does not enter the brain in large amounts.

In order to overcome this problem, Higuchi and the senior author of the joint research, Shimada Hitoshi of the National Institute of Quantum and Radiological Science and Technology of the United States, carried out a chemical modification to convert PBB3 into a more metabolically stable compound PM-PBB3 and label it with fluorine 18. They showed that 18F-PM-PBB3 binds to tau deposits in the mouse brain and causes FTLD mutations.

In addition, the probe detected tau aggregates in 39 surviving patients with Alzheimer’s disease and various FTLD diseases (including Pick’s disease, progressive supranuclear palsy, and cortical basal degeneration). This technology can distinguish different types of patients based on the location of the tau aggregate. The results of biopsy and autopsy confirmed the clinical diagnosis of the patient who underwent the PET scan. The absorption of 18F-PM-PBB3 in the human brain is about twice that of 11C-PBB3, resulting in a more sensitive detection of tau deposits.

In addition, the researchers tested 18F-PM-PBB3 in three patients with mild cognitive impairment and 14 patients with Alzheimer’s disease. This technology can detect tau deposits in the preclinical stage and distinguish them based on the severity of their dementia. Higuchi said: “It is difficult to diagnose various dementias early based on symptoms, but it will be possible with current imaging methods.”

In summary, the research results show that 18F-PM-PBB3 can provide high-contrast imaging of tau aggregates for a variety of patients with Alzheimer’s disease and FTLD. This technology can be used for early diagnosis, disease staging and accurate identification of patient subtypes. Higuchi said: “These obvious differences cannot be achieved with the previous tau PET probe.”

In the future, this technology can be used in animal models to better understand the underlying mechanisms of FTLD. PM-PBB3 can also be used to evaluate candidate anti-tau therapies in preclinical and clinical trials, and to select and stratify patients for clinical trials. In addition, the probe can be used to develop blood-based biomarkers to diagnose different types of dementia. The authors say that due to the widespread popularity of PET scanners, the method is scalable and easy to implement in hospitals. Higuchi said: “We hope to establish a next-generation diagnostic workflow for dementia, including large-scale screening of the elderly through blood tests, and then imaging tests to determine the appropriate treatment.”

The researchers also plan to test the method in long-term studies involving larger sample sizes and a wider range of neuropsychiatric diseases. They collaborated with a venture company called APRINOIA Therapeutics to conduct clinical trials of the imaging probe as a diagnostic reagent; the trials initiated by APRINOIA are in phase II in the United States and Taiwan, and phase III and I in China and Japan stage.

Citation: Brain imaging of tau protein in patients with various forms of dementia (October 29, 2020) from https://medicalxpress.com/news/2020-10-brain on October 30, 2020 -imaging-tau-protein- Patients.html