Black hole “family portrait” is the most detailed so far 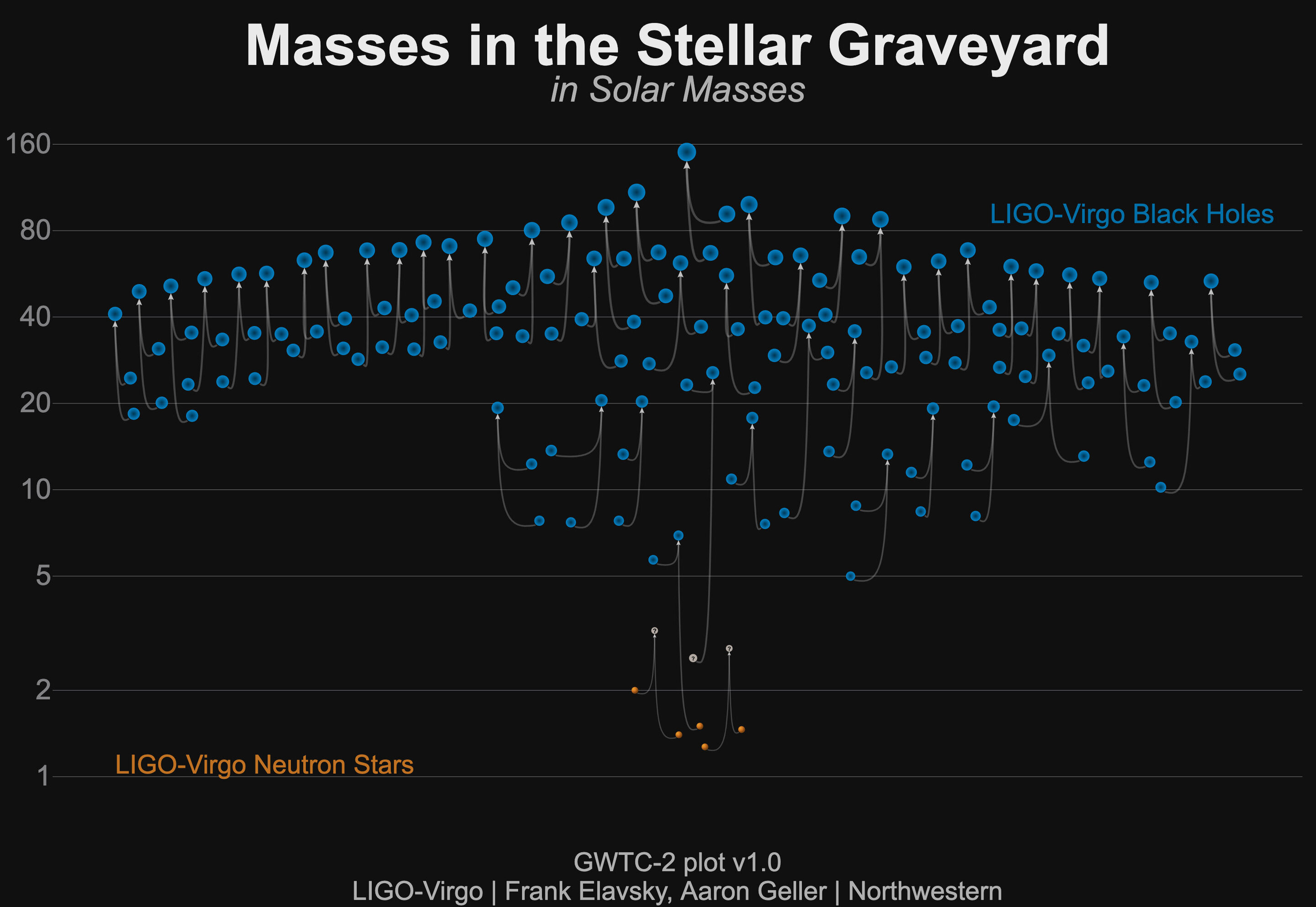 International research cooperation agencies including astronomers at Northwestern University have produced the most detailed family portrait of black holes to date, providing new clues for the formation of black holes. In-depth analysis of the latest gravitational wave data resulted in a wealth of portraits, and many tests of Einstein̵

7;s general theory of relativity. (The theory passes every test.)

The team of scientists that make up the LIGO Scientific Cooperation Organization (LSC) and the Virgo Cooperation Organization are now sharing all the details of their findings. These include new candidates for gravitational wave detection, which have been subject to strict scrutiny (a total of 39 representing various black holes and neutron stars), and new discoveries have been made as a result of combining all observations. 39 events were observed more than once a week on average.

The details are reported in three related papers, which will be available in preprints on arxiv.org on October 28. This research is also being submitted to a peer-reviewed journal.

The gravity wave signal on which the research is based was detected in the first half of the third observation run of the National Science Foundation’s Laser Interferometric Gravitational Wave Observatory (LIGO) (called O3a). LIGO is a pair of identical 4 kilometers. Long, the United States uses a long interferometer, and Italy uses a 3-km long detector Virgo. These instruments can detect gravitational wave signals from a variety of sources, including colliding black holes and colliding neutron stars.

LSC member and paper author Christopher Berry said: “Gravitational wave astronomy is revolutionary-revealing to us the hidden life of black holes and neutron stars.” “In just five years, we have never known. The existence of binary black holes has become a catalog with more than 40. The third observation run produced more discoveries than before. Combining them with early discoveries, painted a beautiful picture of the rich species of the universe. Binary files.”

Berry is the CIERA Visiting Research Professor of CIERA (Centre for Interdisciplinary Exploration and Research in Astrophysics) at Northwestern University and a lecturer at the University of Glasgow. Other Northwestern writers include CIERA members Maya Fishbach and Chase Kimball. CIERA has many theories, simulations and observers who study black holes, neutron stars, white dwarfs, etc.

As a member of the collaboration, Northwestern researchers analyzed data from the gravity wave detector to infer the properties of the detected black holes and neutron star binaries, and provided astrophysics explanations for these findings.

The abstract of the paper is as follows:

“So far, the third observation of LIGO and Virgo has produced many surprises,” said Fishbach, a NASA Einstein postdoctoral researcher and member of LSC. “After the second observation, I thought we had seen the full spectrum of a binary black hole, but the landscape of black holes was much richer and more diverse than I thought. I am very happy to see that future observations will teach What about us.”

Fishbach co-authored the population paper, which outlines the partners’ understanding of the combined family of black holes and neutron stars.

As part of a global team, Berry helped coordinate the analysis to infer the properties of these tests. He also served as a reviewer for the LSC Editorial Board, responsible for cataloging and testing general relativity papers.

LSC member graduate student Chase Kimball provided the calculation of the consolidation rate to the population report. Kimball was co-sponsored by Northwestern University’s LSC team’s principal investigators, CIERA directors Berry and Vicky Kalogera, and was the Daniel I. Linzer Distinguished University Professor of Physics and Astronomy at Weinberg College of Arts and Sciences.

The LIGO and Virgo probes completed their latest observation operations in March of this year. The data analyzed in these three papers was collected from April 1, 2019 to October 1, 2019. Researchers are analyzing and observing the O3b data in the second half of the operation.

It is planned to resume observation next year after completing the work of increasing the detection range.

Berry said: “Merging black holes and neutron star binaries is a unique laboratory.” “We can use them to study gravity (so far, Einstein’s general theory of relativity has passed all tests), and how massive stars live Astrophysics. LIGO and Virgo have changed our ability to observe these binary stars, and as the detector improves, the speed of discovery will only increase.”

More information:
The title of the “Population” paper is “Population properties of compact objects from the second LIGO-Virgo gravitational wave transient catalogue”.

The title of the “catalog” paper is “GWTC-2: The compact binary merger observed by LIGO and Virgo in the first half of the third observation run.”