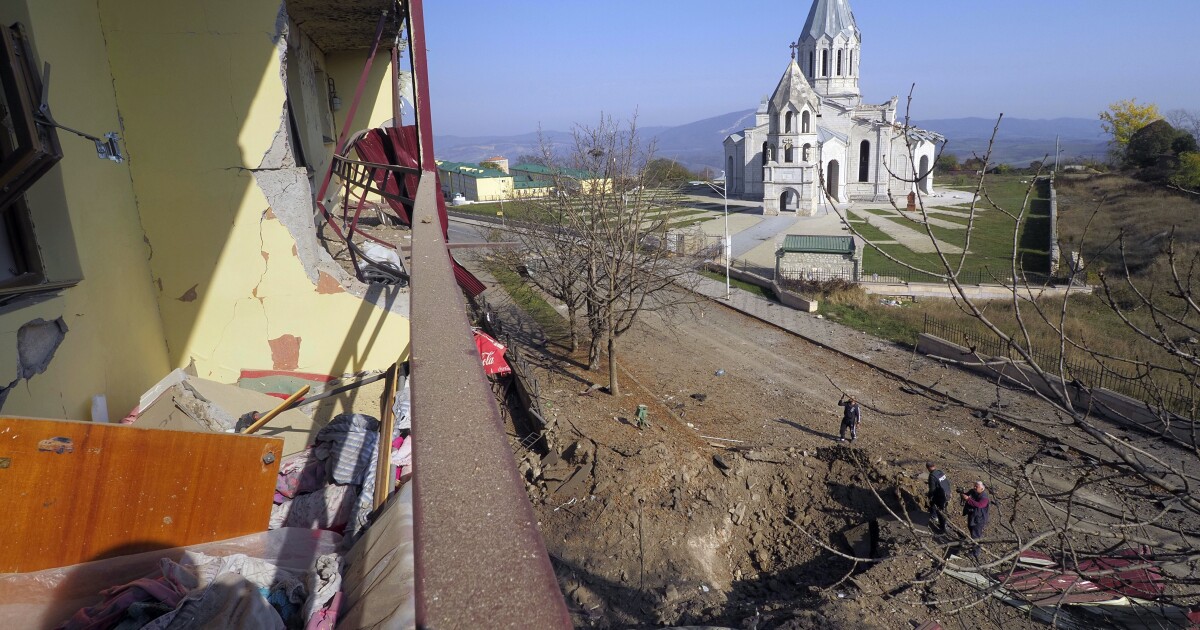 After more than a month of fierce fighting, the Azerbaijani army closed in an important town in Nagorno-Karabakh on Thursday. At the same time, senior diplomats from Azerbaijan and Armenia are also preparing to engage in more dialogues in an attempt to end their long-term conflict in separatist territories.

Arayik Harutyunyan, the separatist leader of Nagorno-Karabakh, said that the Azerbaijani army has advanced to within about three miles of the strategically positioned town of Shushi. He urged residents to mobilize all resources to resist the attack.

Harutyunyan said in a video speech at the town’s cathedral: “The people who control Shushi control Nagorno-Karabakh.” The town was severely damaged by Azerbaijani shelling this month. “We must be aware of this and participate in defending Shushi. We must reverse the situation.”

Shushi is located about four miles south of Stepanakert, the capital of the Nagorno-Karabakh region.

Nagorno-Karabakh (Nagorno-Karabakh) is located in Azerbaijan, but since the end of the war in 1994, it has been controlled by the Armenian ethnic forces backed by Armenia.

The most recent battle began on September 27 and involved heavy artillery, rockets and drones. This was the largest escalation of hostilities in the separatist region in a quarter of a century since the end of the war. Over the past month, hundreds or even thousands of people have been killed.

The separatist authorities in Nagorno-Karabakh on Thursday accused Azerbaijani forces of bombing Stepanakert, Shushi and Martakert with the Smerch multi-rocket system, a destructive weapon designed by the Soviet Union to destroy large areas with explosives and cluster munitions. Officials said that Azerbaijani planes also raided Markt.

The Ministry of Defense of Azerbaijan denied the use of the aircraft and accused Armenian forces of shelling Terter, Goranboy and Barda areas in Azerbaijan. Hikmet Hajiyev, the foreign policy adviser to the President of Azerbaijan, said that a civilian was killed in the Goranboi area.

The Ministry of Defense also reported that two Armenian Su-25 fighters were shot down, which Armenian officials called “false information.”

According to Nagorno-Karabakh officials, 1166 troops and 39 civilians have been killed in the conflict so far. The Azerbaijani authorities have not disclosed its military losses, but said the fighting has killed at least 90 civilians and injured 392 others.

Russian President Vladimir Putin said last week that according to sources in Moscow, the death toll from the fighting was close to 5,000, which was much higher than the official report.

Although the international community called for peace and made three calls for a ceasefire, the hostilities have continued for the fifth week. The latest U.S. armistice agreement that took effect on Monday, like the two previous ceasefire agreements reached by Russia, is immediately invalidated. The warring parties have repeatedly accused each other of human rights violations.

Russia, the United States and France co-chaired the so-called Minsk Group established by the Organization for Security and Cooperation in Europe to mediate the conflict, but they did not make any progress.

The co-chairs of the Minsk Group were originally scheduled to meet with the foreign ministers of Azerbaijan and Armenia in Geneva on Thursday, but negotiations were postponed to Friday, and the prospects for a breakthrough seemed bleak.

Anna Naghdalyan, a spokesperson for the Armenian Ministry of Foreign Affairs, said that the date change is “related to the changing situation and logistical issues”, adding that negotiating a durable and verifiable ceasefire is a priority for Armenia.

The President of Azerbaijan, Ilham Aliyev, repeatedly criticized the Minsk Group for not achieving any results in three decades, and insisted that because of the failure of international mediation, Azerbaijan has the right to retake its territory by force.

In his speech at an investor conference in Moscow on Thursday, Putin said that reaching a settlement agreement on the decades-long conflict is extremely challenging.

Putin said: “This is a serious problem and there is no simple solution.” “Both sides have their own truths.”

Russia has military bases in Armenia and has a security agreement to protect its allies. Russia has been taking subtle diplomatic actions while also trying to maintain good relations with Azerbaijan and avoid a showdown with Turkey.

Before the recent escalation of hostilities, Russia proposed a peace plan that would allow Azerbaijan to regain control of the area outside Nagorno-Karabakh occupied by Armenian forces during the 1994 war. In exchange, Nagorno-Karabakh will receive security guarantees that Turkey and Azerbaijan will completely destroy Armenia.

The houses of the residents of Nagorno-Karabakh were damaged by shelling and they seemed to have no confidence in international peace efforts.

“Neither France nor Russia did anything. We are alone.” said Vovik Zakharian, a resident of Shushi Town.

Zakharian, 72, checked his apartment on Thursday after being vandalized in the morning strike.