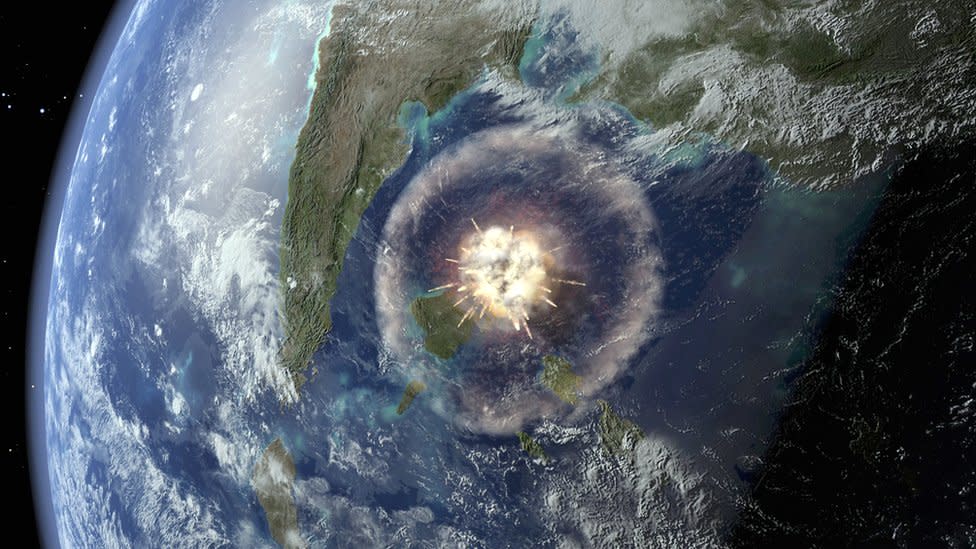 A study showed that the impact of asteroids that killed dinosaurs gave birth to the rainforests of our planet.

Researchers used fossil pollen and Colombian leaves to study how this effect has changed tropical forests in South America.

2-kilometer-wide space rock hit the earth 66 million years ago, the types of vegetation that make up these forests changed dramatically.

The team outlined its findings in the famous “Science” magazine.

Dr. Monica Carvalho, co-author from the Smithsonian Tropical Research Institute in Panama, said: “Our team examined more than 50,000 fossil pollen records and more than 6,000 leaf fossils before and after the impact.”

They found that conical plants called conifers and ferns were common before the giant asteroid hit Mexico’s Yucatan Peninsula.

However, after the devastating impact, plant diversity has declined by about 45%, and extinctions are widespread, especially in seed-bearing plants.

In the next 6 million years of forest restoration, angiosperms or flowering plants dominate.

This transition has also changed the structure of tropical forests. In the late Cretaceous, when the dinosaurs were alive, the distance between the trees that made up the forest was wide. The tops do not overlap, leaving open sunlit areas on the forest floor.

However, after the impact, the forest formed a dense canopy, allowing less light to reach the ground.

So, how did this influence turn the sparse and coniferous tropical forests of the dinosaur era into today’s rainforests, whose towering trees are dotted with colorful flowers and orchids?

Based on the analysis of pollen and leaves, the researchers proposed three different explanations.

First, dinosaurs can prevent the forest from growing too densely by feeding and trampling the plants that grow in the lower layers of the forest.

The second explanation is that the fly ash from the impact enriches the soil throughout the tropics, which is conducive to faster-growing flowering plants.

The third explanation is that the preferential extinction of conifer species provides an opportunity for flowering plants to take over.

The team stated that these ideas are not mutually exclusive and may all contribute to the results we see today.

Dr. Carvalho said: “In the rapid turmoil, the lesson we learned is… tropical ecosystems will not only rebound, but will also be replaced. The whole process takes a long time.”