As Brazil becomes the epicenter of COVID-19, cases across South America are increasing 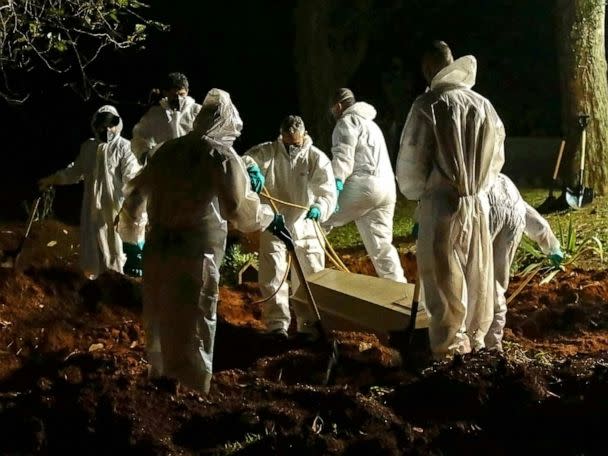 With Brazil becoming the epicenter of the coronavirus pandemic and little to stop the outbreak, the country’s regional neighbors are experiencing a worrying rise in infections.

According to data compiled by Johns Hopkins University, a more contagious new type of coronavirus is circulating in Brazil. The country recorded a record 3,869 deaths from COVID-19 on Wednesday. The highest single-day record to date. In total, the country has confirmed more than 12.8 million COVID-19 cases, including more than 325,000 deaths. According to data from Johns Hopkins, Brazil’s number of cases and deaths due to the disease is now second only to the United States.

7;s Regional Director for the Americas, warned that COVID-19 is surging “dangerously” throughout Brazil and urged all Brazilians to take precautions to stop this spread.

However, Brazil’s far-right president Jair Bolsonaro is still not convinced of the need to restrict activities, believing that such measures violate personal freedom and the economic doom caused by it will be worse than the virus itself.

Venezuelan President Nicolas Maduro said last week that “Brazil now poses a threat to the world” and condemned Bolsonaro’s “reckless attitude” towards the flu pandemic. Although the Venezuelan government has not released official data on COVID-19, data from Johns Hopkins University shows that the country is facing a serious wave of new infections. According to data from Johns Hopkins, there were 1,348 newly confirmed cases in Venezuela on Wednesday, the highest daily total on record in the country.

Medical organizations related to the opposition said that Venezuelan hospitals are struggling to cope with the number of patients in intensive care and demand increased use of ventilators.

According to data from Johns Hopkins, in Colombia, there were 11,449 newly confirmed COVID-19 cases on Thursday, the country’s highest single-day record since late January.

Last week, Colombian President Ivan Duque cancelled a scheduled trip to Brazil to meet with Bolsonaro, citing the worsening epidemic in the country. Earlier this year, Colombia banned takeoffs from Brazil due to variations there.

Since the beginning of this year, the number of COVID-19 cases in Ecuador has increased dramatically, and recently a curfew and lockdown have been imposed in eight provinces

According to data from Johns Hopkins, there were 7,868 newly confirmed cases in Ecuador on Thursday, the highest daily total in the country since mid-June.

Peru announced last week that a study by the country’s National Institutes of Health found that approximately 40% of COVID-19 cases in the capital Lima were attributable to the Brazilian virus, which entered the country’s Amazon region earlier this year. The Peruvian government has banned all flights from Brazil until April 15.

According to data from Johns Hopkins, there were 19,206 newly confirmed cases in Peru on March 25, which is the country’s highest single-day record since the beginning of August.

Starting Friday, Bolivia has temporarily closed its border with Brazil for 7 days. Officials say there will be some leeway in cross-border trade during the shutdown.

According to data from Johns Hopkins, the number of newly confirmed COVID-19 cases in Bolivia on Tuesday was 1,072, the highest daily total in the country in more than two weeks.

According to data from Johns Hopkins, Chile is one of the countries with the fastest COVID-19 vaccination rate in the world. Its number of cases on Thursday exceeded 1 million, of which 7,868 were newly confirmed infections. It is the highest recorded data in a single day in the country since mid-June.

The Chilean government closed the country’s borders in April and tightened movement restrictions amid an already severe blockade. As the new measures were introduced, officials warned that hospitals were approaching young disease victims.

Argentina has warned of the “explosive growth” of COVID-19 cases, prompting the country’s authorities to implement new restrictions, encouraging people to work from home, closing land borders and banning flights from multiple countries including Brazil and Chile. The Argentine government has now postponed the second dose of the COVID-19 vaccine for three months, in order to get the first dose into as many departments as possible, “to maximize the benefits of vaccination and reduce the impact of hospitalization and mortality. “

According to data from Johns Hopkins, there were 1,056 newly confirmed cases in Argentina on Wednesday, the highest daily total in the country since mid-October. Authorities estimate that in the capital Buenos Aires, the number of cases in the past week has increased by more than 30% over the previous week. It is suspected that the new wave of infections is driven by three highly contagious variants, which are thought to have originated in Brazil, the United Kingdom and the United States.

As Brazil becomes the epicenter of COVID-19, the rise in cases across South America first appeared on abcnews.go.com