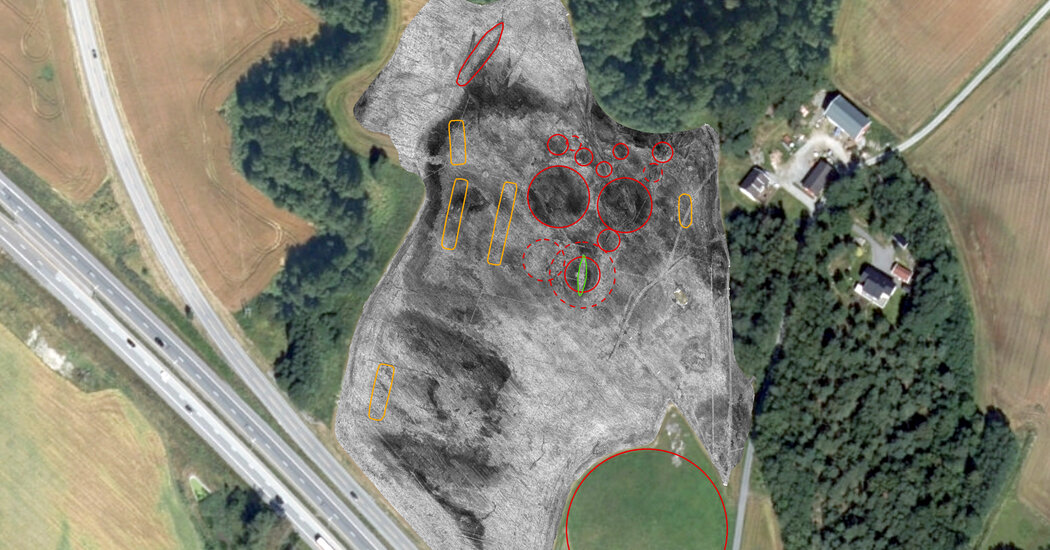 Archaeologists using radar technology have discovered a thousand-year-old ship tomb in southeastern Norway. They hope that the site can provide clues about life from the fall of the Roman Empire to the end of the Viking era.

Lars Gustavsen, a researcher at the Norwegian Institute of Cultural Heritage, is the lead author of the paper on the discovery, which was published in the journal Antiquity on Wednesday. He said that his team made the discovery in Gijerstad, Norway in April 2018. A farmer informed the local authorities of his plan to build a drainage ditch in one of the farms, thereby facilitating archaeological investigations.

Gustafson said: “Before we started, we might have known other similar locations in the area. Now, we have another location that can provide us with information on how to build society and what kind of political system they have. More information. What kind of technical systems do they have.”

Archaeologists used a mobile high-resolution ground-penetrating radar system. They found evidence of pirate ship burials in the Viking era between 750 and 1050, a banquet area and another building. During this period, the pirate ship burial symbolizes safe entry into the afterlife, which is a funeral. Signs of identity, wealth, and political or religious ties.

In the next few months, the archaeological team will conduct a larger investigation, hoping to unearth more evidence about the wider society at that time.

(Mr. Gustafson said that the farmer Olav Jellestad, who owns the land where the remains were found, will not be able to grow crops on a piece of his land during further archaeological exploration, but the Norwegian government Compensation was given. Jellestad did not respond to a request for comment.

The document stated that the site appeared to have originated from an Iron Age cemetery and expanded during the Viking Age.

For most of the entire era, Scandinavia was made up of small kingdoms. When these small kingdoms were tied together, they sometimes launched a series of fleets carrying hundreds or thousands of warriors for brutal attacks. . They also engaged in the slave trade and maintained a wide range of trade routes: from the north of the Arctic Circle to the west coast of Norway, ship transportation between Denmark and the European continent, bringing enslaved people, precious metals and goods to and from the Mediterranean.

Dr. Elizabeth Ashman Rowe, an associate professor of Scandinavian history at the University of Cambridge, was not involved in the study. He said these findings are exciting but not surprising. She said that past survey results indicate that the region is under the control of a series of local rulers in charge of small areas and trading venues.

She said that once the excavation is completed, it can be explained whether a man or a woman was buried at the ship burial site. Most of the people found buried on the ship were men, but two buried women were found in a nearby location.

Dr. Luo said that the embroidered tapestry and other cultural relics found at the scene indicate that one of the women may be a priestess, a “witch” or a person with significant religious power or responsibility. She said that the woman buried with her may be her assistant.

She said: “It fills up our impressions of the ninth and tenth centuries of this area in southern Scandinavia,” she added. The results of the study show that the aristocratic centers of the area share a common architectural style. And has a specific combination of buildings and tombs.

She said: “It emphasizes that although they are independent to some extent and have few power centers, they share the same culture.”

New coronavirus variants complicate the fight against the pandemic