A couple mistakenly destroyed a $440,000 painting in the exhibition 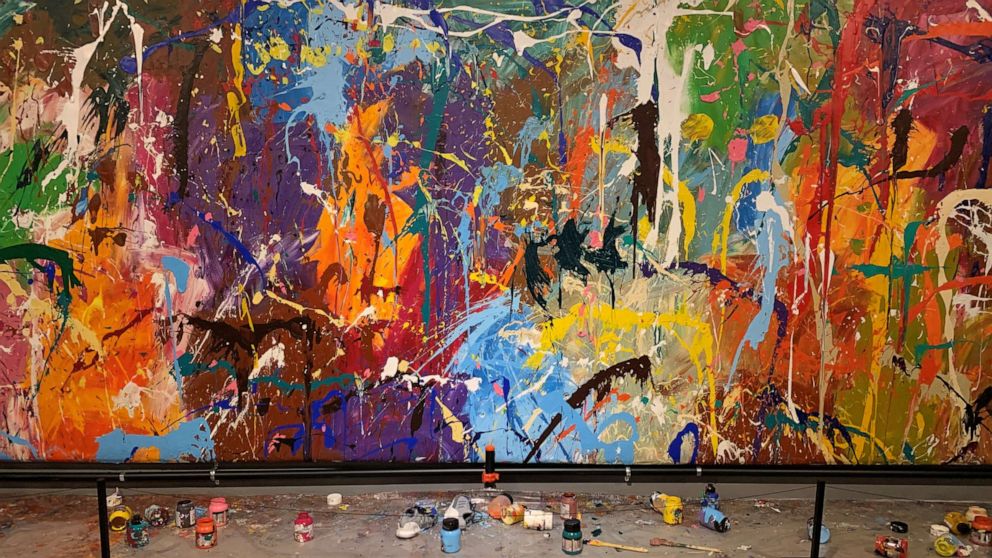 Seoul, South Korea-An American graffiti artist’s artwork displayed in the United States was damaged by a couple in their 20s who believed that the paint and brushes placed in front of the artwork were for audience use.

The staff of the gallery exhibition noticed new brush strokes on the wall last Sunday-a small dark green brush on the right side of the center. After checking the security cameras, the two suspects were taken away by the police for investigation.

The organization hosting the exhibition told ABC News that it is currently negotiating with the artist to take appropriate measures.

Kang Wook, CEO of Contents Creator of Culture, the co-organizer of the exhibition, told ABC News: “We immediately called the police and talked to the insurance company about the damaged artwork.”

; “But as the responsible agency, we will do our best. Minimize the harm to the couple who deliberately vandalized the job.”

According to Kang, the graffiti was not framed due to its large size. The destroyed artwork is 22.9 feet by 7.8 feet, and is the only work in the exhibition without a frame.

John Andrew Perello’s name comes from JEYOne. He does not intend to respond to this incident. His representative from BEYONDER, David Maginot, told ABC News.

According to its agency, JonOne’s damaged artwork is worth approximately US$440,000. The graffiti “Untitled” has attracted more public attention in South Korea after being painted, and the exhibition will continue until June 13 at the Street Noise exhibition in Lotte World Shopping Center, Seoul.

The decision to display performance equipment in front of JonOne’s work dates back to 2016, when JonOne completed the problematic artwork in the “Big Graffiti” exhibition at the Seoul Art Center’s Graffiti Museum. It is displayed together with the props used by the artist, just like the current display.

Kang said: “The paint and brushes used by the artist form a complete set of graffiti canvas works.” He explained that the props are part of the exhibition to help highlight the artist’s work history.

Since the accidental painting, the agency responsible for the exhibition has provided more guidance to the audience and strengthened the surveillance of the works to prevent such misunderstandings from recurring.

“Due to the characteristics of contemporary art, many such things will happen in the future. Exhibition organizers must take extra care to protect artworks, because audiences may mistakenly think that art like Jon O’Neill can be painted.” Korean pop culture expert Ha Jae-geun told ABC News.

JonOne, who currently lives in Paris, was awarded the French Medal of Honor for Culture and Communication in 2015. The first prize in France is to recognize people who have served the country for them.

Hakyung Kate Lee of ABC News contributed to this report.